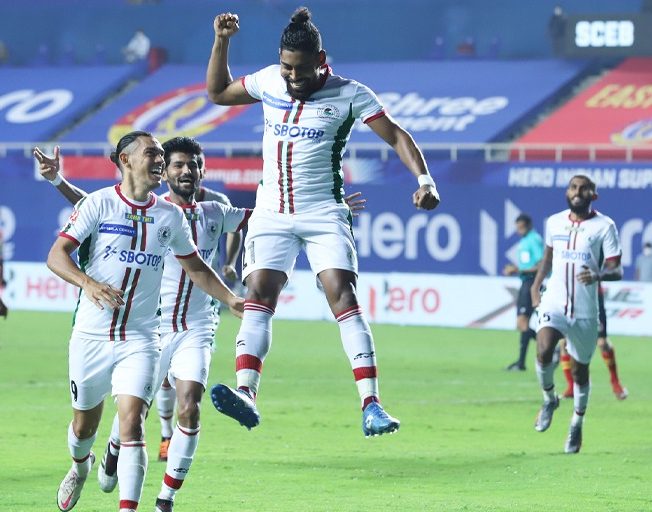 Vasco: A proven goal scorer is always an asset for any football team. ATK Mohun Bagan is benefitting from this simple, time-tested formula as Roy Krishna is quickly turning himself into a Green and Maroon darling.

Krishna had already entered the record books after scoring ATKMB’s first ever goal in ISL, in their 1-0 win over Kerala Blasters on November 20. Now he is also the storied Derby’s first scorer in ISL.

Singh would similarly be forever etched in Derby history as the second goal getter in Bagan’s 2-0 victory.

In the beginning though it looked far from smooth for the Mariners. Skepticism engulfed the proceedings during the game’s first quarter as SCEB enjoyed more ball possession.

They tried to play among themselves, waiting for the opposition to come out of their comfort zone. This though suited Bagan as their coach Antonio Habas usually sets up his teams to absorb pressure and hit on counter attacks.

One such fast break gave Bagan the game’s first sight at goal when man-of-the-match Javier Hernandez’s 36th minute left-footed volley forced a diving save out of goalkeeper Debjit Majumdar, a former Bagan player.

It was as far as both teams could come lose to scoring in a goalless, uptight first half. The action needed a moment of magic to lift from the realm of mundaneness.

Roy Krishna’s 49th minute snap shot provided just that. The Fijian striker controlled a pass from Javier Hernandez with his first touch and launched a stinging grounder through the legs of Scott Neville from outside the box to beat Majumdar.

The lead helped Bagan assert some sense of control over the flow of the game. By this time, the Green and Maroons were snatching loose balls in midfield and executing quick breaks on SCEB.

Playing a derby as their first competitive game of the tournament, the energy levels of Red and Gold players noticeably dipped after the hour mark.

East Bengal couldn’t quite lay their teeth into Bagan’s three-man deep defence and weren’t able to utilise the set-pieces that came their way, in spite of a specialist hired for that specific purpose.

Unable to create space between or run behind Bagan’s defenders, East Bengal resorted to long rangers.

Anthony Pilkington came closest with his angular right footer in the 82nd minute but Arindam Bhattacharjee was equal to the task, parrying away the ball for a corner.

Robbie Fowler, SCEB’s debutant coach, would have dearly wanted that shot to go in. But instead saw a sprightly Manvir bury his team.

Bagan coach Antonio Habas’ greater experience in management, particularly in India, came in handy during this period of play.

Aware that SCEB had to move forward in search of the equaliser, he introduced the sprightly India international Manvir into the action in the 64th minute.

Replacing Aussie striker David Williams, Singh summoned all his energy to shake off Narayan Das on the left flank and enter the penalty box with menace in the 85th minute.

SCEB’s overlapping players tracked back swiftly but a composed Manvir jagged back on his left foot and finished off the game with a booming left footer high into Majumdar’s net.

The helpless reaction on Fowler’s face following the goal summed up his team’s night.