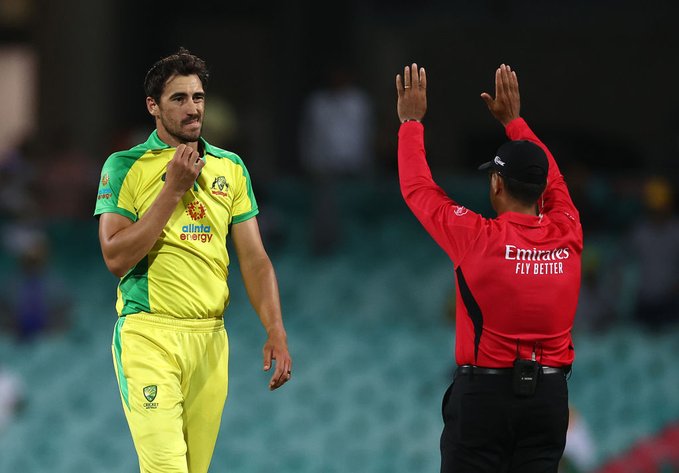 Canberra: Australia captain Aaron Finch on Tuesday said that Mitchell Starc’s poor form is not a concern for the team although he did admit that the left-arm pace bowler would have preferred to have the ball swinging right from the start in the ongoing ODI series.

Starc conceded 65 runs in the nine overs and picked just one wicket, that of tail-ender Mohammed Shami, in the first ODI and gave away 82 runs in his nine overs in the second match, failing to get even a single wicket.

“He’d (Starc) love to be swinging the ball and getting it right early on but the reality is when you’re defending big totals and you’re playing against good players, they are coming hard at you,” said Finch while speaking to the reporters on the eve of the third ODI against to be played at the Manuka Oval.

“There will be conversations today about what we can do slightly different. Whether it’s a tactical thing or when we’re using him through the innings. We’ll chat about that today. But, definitely no panic stations here from my point of view,” he added.

Starc has been negotiated quite easily in the powerplay by the Indian batters. He conceded 29 runs in three overs in the second match and 27 runs in two overs in the first ODI at the Sydney Cricket Ground.

He had leaked 20 runs in the first over of the first ODI on November 27. But Finch said that Starc’s failure has been mainly due to the flat wickets that have been on offer.

“There’s nowhere to hide in ODI cricket when you’re playing on some really flat wickets with quality opposition… from my point of view, and chatting to other guys about his technique, and little things that his fellow bowlers and the fast bowling cartel really monitor, they seem to think he’s going really well. So it’s just a matter of time,” Finch said.