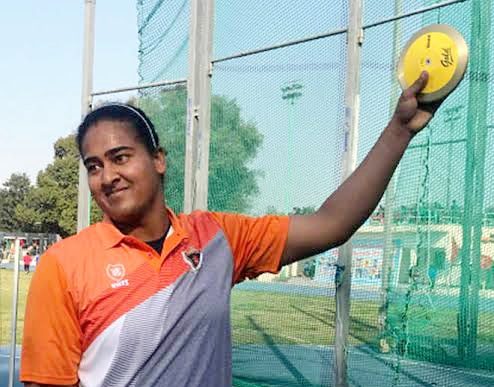 Patiala: Kamalpreet Kaur’s one legal throw in the Federation Cup Senior Athletics Championships on Friday rewrote the women’s discus throw national record and earned her a spot in the Olympic Games competition to be held in Tokyo in July this year.

Her 65.06m opening effort did the trick for her, producing the fourth national record in five days.

On a day when the men’s triple jump competition saw an intense battle, with Karthik Unnikrishnan producing a last-ditch 16.73m and Abdulla managing 16.59m on his last try to push their Kerala team-mate Eldhose Paul to the third place with 16.53m, it was Kamalpreet’s solitary throw that stole the limelight.

The 25-year-old from Badal in Punjab was not overawed by the presence of the 2014 Asian Games champion Seema Punia.

With Seema coming up a no mark on her opening throw, Kamalpreet could enter the fray without worrying about a target distance but only focussed on giving her best. She wound herself up well and unleashed the biggest throw by an Indian woman, surpassing the national record that has stood at 64.76m in the name of Krishan Poonia since 2012.

Seema, who has won a medal in each of her four Commonwealth Games appearances and has two Asian Games medals, fought hard to mark her return to competition after the 2018 Asian Games with a victory. She came up with four throws in excess of 60.50m but her best was the 62.64m that she managed on her fifth attempt.

Kamalpreet became the 10th Indian to secure the Tokyo Olympic Games athletics qualification mark laid down by World Athletics. The mixed team in the 4x400m relay has also secured a berth in the Tokyo Games.

Tajinderpal Singh Toor (shot put), Dutee Chand (100m) and Annu Rani (javelin throw) can get into the Olympic competition by virtue of their world ranking.

Tokyo 2020: No overseas fans at Olympics due to pandemic fears