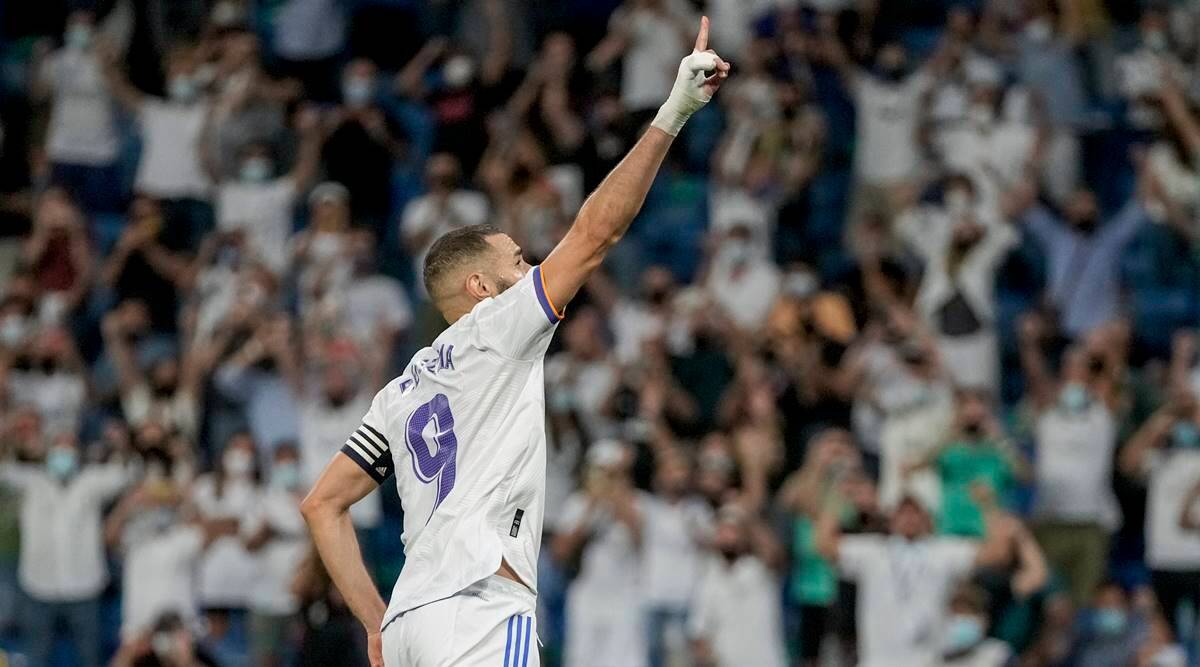 New Delhi: Vinícius Júnior sent his low shot into the net and rushed to the sideline, jumping over the barrier and going into the stands to be quickly engulfed by Real Madrid fans.

It was a scene that wouldn’t have been possible during the last 18 months.

With goals by Vinícius Júnior and debutant Eduardo Camavinga and a hat trick by Karim Benzema, Madrid twice came from behind before comfortably beating Celta Vigo 5-2 in the Spanish league on Sunday. The game marked Madrid’s return to the Santiago Bernabéu Stadium more than 18 months after it was closed because of the coronavirus pandemic and a massive renovation project.

“It was a special night for us,” Benzema said. “I always say that we need the support of the fans and today they gave all they had to help us again.”

The remodeling of the Bernabéu is not expected to finish until 2022 but the stadium reopened to a limited crowd of 19,874 in the first match at the venue since March 1, 2020, when Madrid defeated Barcelona 2-0 with Zinedine Zidane still as its coach.

Defending champion Atlético Madrid earlier also needed to rally to avoid a disappointing result in a milestone match, scoring two late goals — including one in the ninth minute of stoppage time — to beat Espanyol 2-1 in Antoine Griezmann’s first game back since a stint with Barcelona.

Madrid took advantage of the prohibition on spectators in stadiums because of the pandemic to accelerate the construction work at the Bernabéu while it played its home matches at the small Alfredo Di Stéfano Stadium in the club’s training complex. It played three straight away matches in the first three rounds this season to get the venue ready for crowds again.

The seating areas that are still not available to the public, mostly in the lower sections of the stadium, were blocked off and covered up, and there was a lot of construction work still visible inside and outside the venue. The huge structures that will hold the stadium’s new retractable roof are already in position.

On the field, it was Celta that opened the scoring with Santi Mina finding the net from inside the area after a defensive mistake by Madrid only four minutes into the match.

Benzema equalized with a shot from inside the area after a pass by Federico Valverde, but Celta retook the lead in a breakaway in the 31st with Franco Cervi finding the net from close range.

Benzema had a goal disallowed for offside in the 39th but equalized again with a header at the start of the second half. Vinícius Júnior scored the go-ahead goal in a breakaway in the 54th and was shown a yellow card for his celebration with the fans. Camavinga, making his debut off the bench after being signed at the transfer deadline, added to the lead from close range in the 72nd.

Benzema, already the league’s leading scorer with five goals, closed the scoring by converting a late penalty kick prompted by a nice move by Vinícius Júnior inside the area.

The victory left Madrid at the top of the standings with 10 points from four matches, tied with Valencia and Atlético.

The match was postponed from Saturday to give more time to rest for players from national teams that participated in South American World Cup qualifiers.

Thomas Lemar scored deep into stoppage time to give Atlético the win at Espanyol in Griezmann’s first match back on loan from Barcelona.

The France forward had a lackluster performance, being substituted early in the second half by João Félix, who hadn’t played this season because of injury.

Raúl de Tomás put the hosts ahead with a header in the 40th but Yannick Carrasco equalized in the 79th and Lemar got the winner with a shot from inside the area in the ninth minute of injury time after an assist by Carrasco. The ball found the net after deflecting off the goalkeeper’s hand and the crossbar.

The match had 10 minutes of stoppage time after it was interrupted for a water break along with a couple of video reviews.

Griezmann is back with Atlético on a one-year loan from Barcelona, where he never met the high expectations of his 2019 transfer from Atlético for 120 million euros ($142 million). He had played five seasons under Atlético coach Diego Simeone before that.

Valencia conceded early but recovered to win 4-1 at Osasuna for its second win in a row.

No Ronaldo, no wins for Juventus after losing at Napoli 2-1