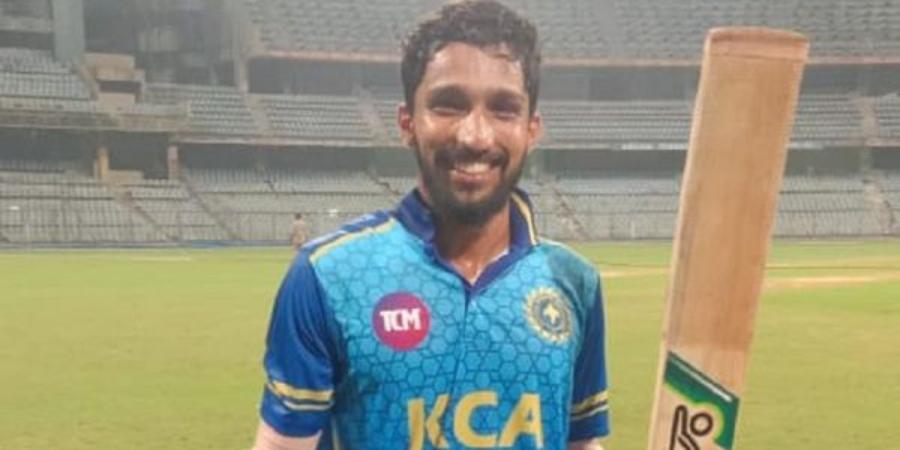 Chennai: Kerala’s Mohammed Azharuddeen wouldn’t have sat out on the arduous journey to emulate the Mohammed Azharuddin of Hyderabad, if not for a cricket-crazy elder brother and a die-hard fan of the former India captain.

From his name to his career option, everything to do with Azharuddeen was decided by Kamaruddeen.

The journey continues, though.

While the first step towards fulfilling his family’s dream was taken when he was chosen to represent Kerala in 2015, he shot into the national limelight recently with his 37-ball 100 in the domestic T20 Syed Mushtaq Ali Trophy match against Mumbai.

“I have met him like twice or thrice. Once in my hometown and once in Hyderabad when we were there to play Ranji Trophy and he was the head coach of Hyderabad. I shared the story of how I was named after him with Mohd Azharuddin sir,” Azharuddeen told PTI.

“To be frank, like my elder brother, I did not follow Azharuddin sir. I have just watched a few videos of his on Youtube,” the Kerala stumper added.

The 26-year-old from Thalangara in north Kerala’s Kasaragod town, known for its love for cricket rather than football, said the blistering knock would have surely pleased his brother Kamaruddeen, who had changed his youngest brother’s name from Ajmal to Azharuddeen after his birth.

Azharuddeen has seven brothers and all are big-time cricket fans.

“My family is a cricket family. I have seven elder brothers. Everyone has played cricket. Obviously, they follow the game when I play. Even if they don’t watch, they used to follow the scorecard,” he added.

About his memorable knock against Mumbai, which was the third fastest T20 ton by an Indian batsman, Azharuddeen said he had not made any special preparation prior to that.

The player’s game was affected after he was dropped down in the batting order by former coach Dav Whatmore.

“I am an opener. After Dav Whatmore came as coach he made me a middle-order player. I came down the order due to team requirements. It was not a good slot for me. I just requested the coach (Tinu Yohannan) to allow me to bat in the right slot, which is opening.

“I like to hit straight. One of my strengths is hitting straight. I am good at hitting straight, against fast bowling and spin bowling. It was a true wicket (in the game against Mumbai) and I batted with confidence,” he added.

Asked if he was looking forward to the IPL auction scheduled next month, Azharuddeen said he was not too worried about it.

“I am in a good zone. I am not worried about the IPL auction or something. I am just concentrating on our fourth match against Andhra,” he said.

When asked about his goals, Azharuddeen mentioned playing in the IPL and scoring hundreds in Ranji Trophy.

“Not for this year actually. There are some goals, play IPL, score a few hundreds in Ranji trophy. I (made my) debut in 2015, I didn’t get a chance to bat in top-order. Now I am clear about how to approach my batting, clear in my mind,” Azharuddeen, a big fan of India captain Virat Kohli and M S Dhoni, said.

He also said he looked up to fellow Kerala cricketer Sanju Samson.

Coach Yohannan, a former India pacer, said making Azharuddeen open the batting gave him the freedom to express himself.

“It was a very good display. We decided to open with him. He is a free-stroking player and likes to play shots. He had the freedom to play his game and he has expressed himself,” Yohannan said of the keeper-batsman.

Also, he said Azharuddeen has done well since age-group cricket and has come through the system.

“He has come through the system. Since his young days he has shown a lot of promise and was admitted to the Kerala Cricket Association Academy in Kottayam,” the coach added.