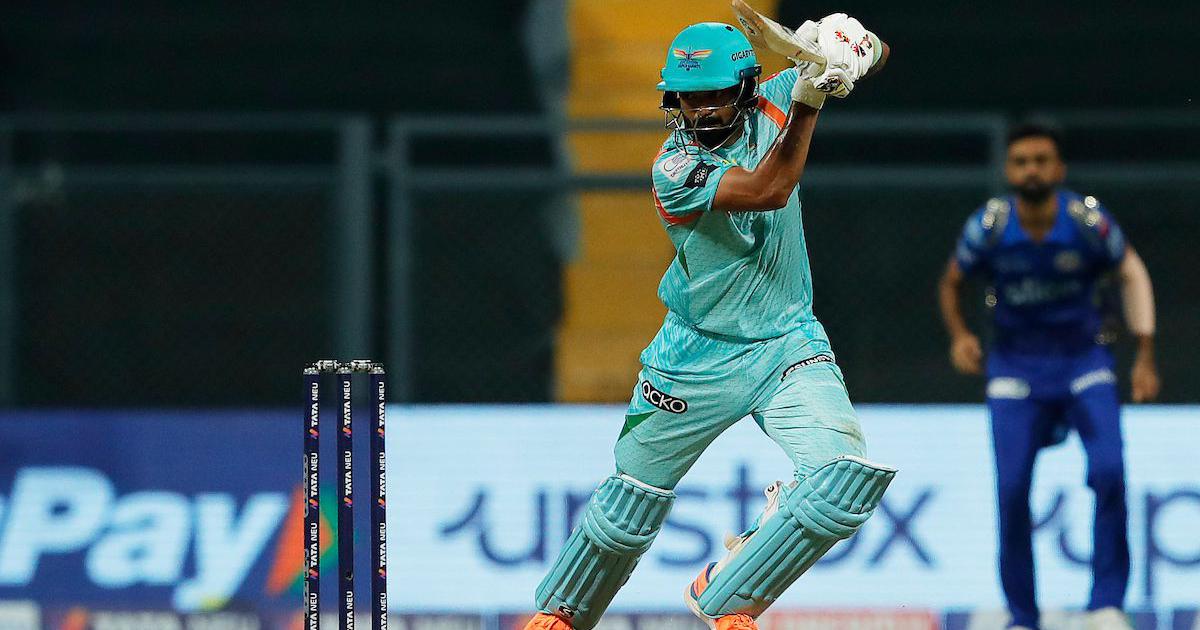 Chasing 169 for victory five-time champions Mumbai Indians got off to a steady start as Rohit Sharma batted aggressively but wicket-keeper batter Ishan Kishan batted a bit too cautiously as the duo scored 43 runs in six overs of powerplay.

Leg-spinner Ravi Bishnoi was introduced into the attack and he dismissed Ishan Kishan in the very first ball of his spell for 8 off 20 balls as Mumbai Indians lost their first wicket for 49.

Dewald Brevis joined his captain Rohit Sharma and the duo took the team’s total beyond the 50-run mark in the eighth over. In the next over Brevis was sent packing by left-arm medium-pacer Mohsin Khan for 3 as Mumbai lost their second wicket for 54.

In the next over MI were dealt with a huge blow as Krunal Pandya got the prized scalp of Rohit Sharma for 39 off 31 balls. Ayush Badoni was introduced into the attack and he got the important wicket of dangerous Suryakumar Yadav for 7 to leave Mumbai tottering at 67/4.

Mumbai Indians desperately needed a partnership and Tilak Varma and Kieron Pollard did exactly that taking the team’s total beyond the triple-figure mark in 15.1 overs but the required rate kept increasing.

Tilak-Pollard’s partnership of 57 runs was broken by Jason Holder as he dismissed Tilak Varma for 38 from 27 balls and Mumbai lost half of its side for 124 runs.

Mumbai Indians needed a mere impossible 39 runs to win off the last over of the match where Krunal Pandya dismissed Pollard for 19. One ball later Jaydev Unadkat was run out for 1 and Krunal took his third wicket of the match dismissing Daniel Sams for 3 as Mumbai were restricted to 132/8 in 20 overs falling 36 runs short of the target and succumbing to their eighth defeat of the season.

Earlier in the day being put in to bat Lucknow Super Giants openers Quinton de Kock and KL Rahul gave their side a steady start. Jasprit Bumrah gave Mumbai the first breakthrough by dismissing wicket-keeper batter de Kock for 10 as LSG lost their first wicket for 27.

Manish Pandey walked in to bat and gave support to his skipper KL Rahul at the other end to take the team’s total beyond the 50-run mark in the 9th over.

Skipper Rahul tried scored runs at a brisk pace in order to boost the current run rate and in the process reached his half-century. The Pandey-Rahul partnership of 58 runs was finally broken by Kieron Pollard as Lucknow lost their second wicket for 85 runs.

Marcus Stoinis joined Rahul and the skipper took LSG beyond the triple-figure mark in 12.2 overs. Daniel Sams dismissed dangerous Stoinis for a duck as Lucknow lost their third wicket for 102. In the next over Krunal Pandya was dismissed by Pollard for 1 who became his second victim reducing LSG to 103/4.Deepak Hooda too failed to perform with the bat as he was dismissed by Riley Meredith for 10 as Lucknow lost half of its side for 121.

KL Rahul kept on hitting boundaries and sixes to take Lucknow’s total beyond the 150-run. Rahul went on to score his second century of the season and his fourth in IPL overall.

IPL 2022: Play-offs and final will be held with full audience capacity in Kolkata and Ahmedabad