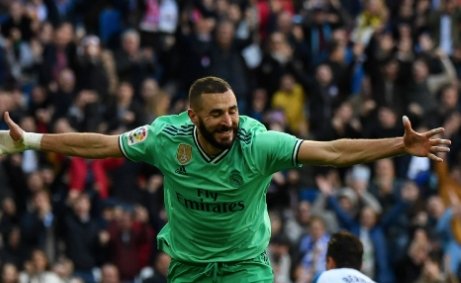 Madrid: Karim Benzema spared Real Madrid’s blushes on Tuesday with the winning brace which shot the reigning champions to a 3-1 win over Athletic Bilbao that draws them level on points with La Liga Leaders Real Sociedad.

Frenchman Benzema headed home a cross from Dani Carvajal with 16 minutes remaining to put Real ahead against battling Bilbao, who had fought back to level earlier having lost Raul Garcia to two quickfire bookings in opening minutes.

Toni Kroos had given the hosts the lead in Madrid with a thumping strike on the stroke of half-time, but Ander Capa rocked the capital club six minutes after the break when he shot past Thibaut Courtois at the second time of asking.

The 32-year-old Benzema had other ideas however, putting his team in front before making sure of the points in stoppage time with a clinical finish after collecting Luka Modric’s pass.

Third-placed Madrid gained their fourth straight win in all competitions and are equal on 26 points with Sociedad, who face troubled Barcelona at the Camp Nou on Wednesday, and local rivals Atletico Madrid.

Tuesday’s match was the game in hand which Real had on Sociedad, while Atletico have played two games fewer than their two title rivals.

Barca are nine points back but play one of their two games in hand in the hope of giving some momentum to what has been a miserable season so far.