La Liga: Dembele pulls Barcelona to within a point of Atletico 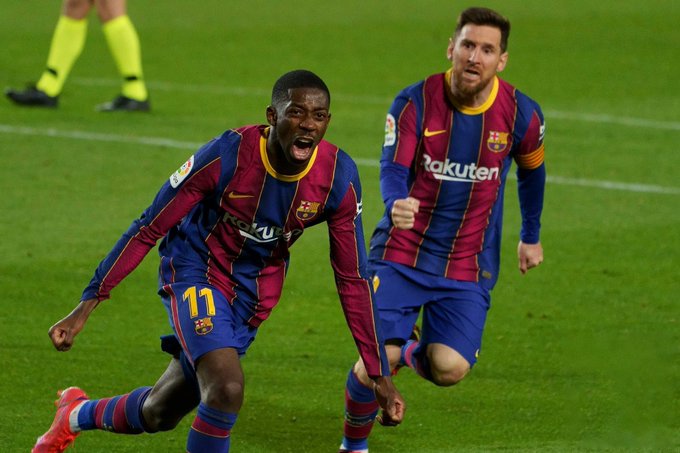 Barcelona: Ousmane Dembele’s last-minute goal gave Barca three vital points with a 1-0 win at home to Valladolid to move them to within a point of Atletico Madrid at the top of La Liga.

Dembele fired home at the far post after the ball had been flicked on when it looked as if Barca were not going to break down a well-drilled Valladolid who ended the game unhappy at having a good penalty appeal turned down and ending the game with 10 players after Oscar Plano was shown a rigorous red card.

Barca coach Ronald Koeman repeated the starting eleven that had won 6-1 away to Real Sociedad two weeks ago, Xinhua news reports, but his side struggled to find the fluency it showed in San Sebastian, thanks partly to a well-organiSed Valladolid.

The visitors, who had lost just one of their last six games, were unlucky not to open the scoring in the ninth minute when Kennan Kodro’s header bounced back off the crossbar.

Barca was again playing with three central defenders and that allowed Valladolid to close down spaces in central midfield and they created very little until the last minute of the half when Valladolid keeper, Joel Masip got enough of a touch on Pedri’s shot to tip it onto the post.

Neither side made changes at the start of the second half, although Barca changed their system with Frenkie de Jong moving into midfield from defence and the home side started the brighter of the two with Jordi Alba firing over the bar before Antoine Griezmann nodded wide after Ousmane Dembele’s shot was blocked by Masip after a pass from Messi.

Valladolid asked for a penalty after the ball clearly hit Jordi Alba’s hand in the Barca area, but the VAR decided that it was not punishable, and almost immediately afterward, Barca made a triple change with Martin Braithwaite, Francisco Trincao, and Ronald Araujo replacing Griezmann, Sergio Busquets, and Griezmann

Messi fired a shot just wide of the post, before Barca’s task was made easier with 11 minutes to go when Valladolid’s Oscar Planas was shown a straight red card for a foul on Dembele. It was a bad foul, but a direct red seemed to be a harsh decision from the referee.

Trincao failed to control the ball when he should have scored and it looked as if the game was going to end in a draw before Dembele’s late decider which means that Barca would win the title if they win their remaining games this season.

Last-minute goal helps Barca come within a point of Atletico