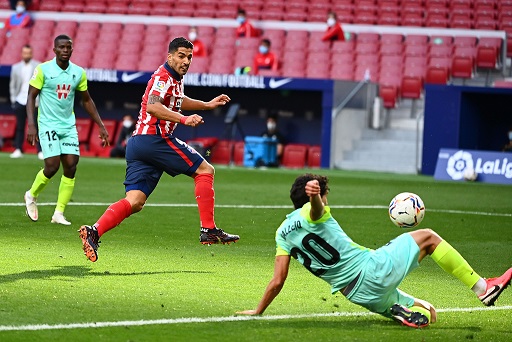 Madrid: Four days after arriving from rival Barcelona, Luis Suarez scored two goals and set up another in Atletico’s 6-1 rout of Granada in the team’s La Liga opener on Sunday.

Suarez, who joined Atletico after being told by Barcelona he wasn’t wanted anymore, quickly left his mark after coming off the bench in the 71st minute at the Wanda Metropolitano Stadium.

His first touch was a perfect pass for Marcos Llorente’s goal, and in the 85th the Uruguay striker netted for the first time with a neat header into the top corner. His second goal came in the final minute of stoppage time, a left-footed strike after his initial shot hit the post.

Suarez had already come close to scoring with a low shot that went wide in the 76th, and he also had been denied an opportunity from the penalty spot after video review reversed a penalty call for a foul on him. He was ready to take the penalty when the call was reversed.

Atletico won’t pay more than 6 million euros ($7 million) in variables for the 33-year-old Suarez, who was let go as Barcelona revamped its squad following a struggling season that ended with an embarrassing 8-2 loss to Bayern Munich in the quarterfinals of the Champions League in August.

Messi and Barcelona will start their league season against Villarreal later on Sunday.