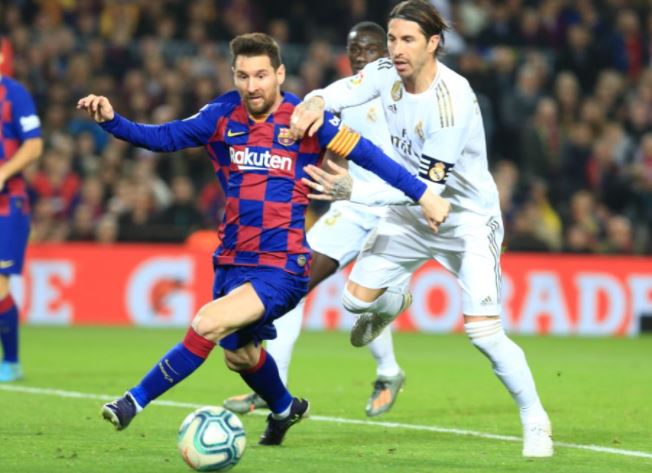 Madrid: The ‘Clasico’ between Real Madrid and FC Barcelona on Saturday is the key game of Matchday 30 in La Liga with the winner assured of going to the top of the league table for at least 24 hours and perhaps longer.

The game comes with Barcelona just one point behind Atletico Madrid and Real Madrid a further two points back, but with a better head-to-head goal difference than their two title rivals, Xinhua news reports.

It also comes with both Real Madrid and Barca producing their best form of the season, with Real Madrid turning on the style to beat Liverpool 3-1 in the Champions League on Tuesday night, while Barca have won their last six league games and can look forward to playing the final of the Copa del Rey against Athletic Club Bilbao on April 17th.

Real Madrid go without Sergio Ramos, who has a muscle injury, and Raphael Varane with the coronavirus, while Eden Hazard could return to the subs’ bench after his latest injury.

Barca are working to have Gerard Pique available, but Ronald Araujo should be back, even though Ansu Fati and Philippe Coutinho are both long-term absentees.

Atletico Madrid don’t play until Sunday night and Diego Simeone’s side returns to Seville to face an in-form Betis, just a week after sliding to a 1-0 defeat away to Sevilla.

That defeat means Atletico have taken just 12 points from the last 24 to see their comfortable lead over Barca and Real Madrid evaporate and Simeone faces further problems at the weekend with top scorer, Luis Suarez out for around three weeks and key midfielder Marcos Llorente also injured.

The weekend kicks off on Friday with Huesca at home to Elche in a key game to avoid relegation. Both sides have improved considerably in recent weeks and a win for Huesca would lift them out of the bottom three for the first time this year.

Cadiz travel to Getafe with the club still under the cloud of the racist insult their defender Juan Cala allegedly directed at Valencia’s Mouctar Diakhaby a week ago for a game that doesn’t promise to be one for the neutrals to enjoy.

Javier Calleja makes his debut as coach of the bottom of the table Alaves with a derby away to Athletic Club, who need to shake up their disappointment of last weekend’s Cup final defeat to Real Sociedad and tired legs from their 1-1 draw against the same side in La Liga on Wednesday night.

Second from the bottom, Eibar need to end a run of 12 games without a win when they entertain mid-table Levante in the game that kicks off before Real Madrid take on Barca.

Villarreal look to add to their run of three consecutive wins on Sunday lunchtime when they entertain Osasuna, who travel after three successive draws, while Real Sociedad visit Valencia’s Mestalla Stadium where the home side has won their last four matches.

Valladolid were unlucky not to take a point from the Camp Nou on Monday and will be optimistic they can move closer to assuring survival when they entertain Granada, who travel after playing Manchester United in the Europa League.

The round of games ends on April 12 with what promises to be an entertaining game between Celta Vigo, who still have an outside chance of qualifying for Europe, at home to fourth place Sevilla.