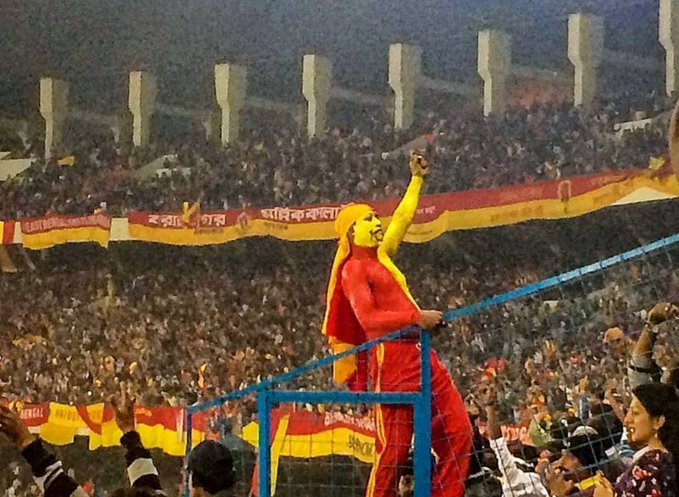 East Bengal are one of the most successful clubs in Indian Football. Photo: @Twitter

Kolkata: Century-celebrating East Bengal’s rich history is benchmark enough to let them play in the top-tier Indian Super League (ISL), the FPAI wrote to the AIFF on Friday.

However, FPAI president Renedy Singh, a former East Bengal player, has clarified in a separate letter to Das that FPAI’s letter was sent without his consent and it is wrong on principle on FPAI’s part to “come out in support of any particular club” as the body stands for supporting footballers.

The hitherto unrecognised Football Players Association of India (FPAI) urged the All India Football Federation (AIFF) to keep in mind the “massive fan following” that EB commands, which the sport needs to “grow and thrive in India”.

Though acknowledging that this does not fall under their “jurisdiction”, it is an appeal they have undertaken considering the legacy of the club, that the AIFF and its marketing partners, who conceptualised and run the tournament should “seriously consider”.

“We the association sincerely urge you, to include the East Bengal Club, Kolkata, into the ISL, without any hesitation or delay,” FPAI general manager Cyrus Confectioner wrote in a letter addressed to the AIFF secretary Kushal Das.

“The club is rich in history and is one of the oldest and most premier clubs, having a massive fan following, something which the sport needs for it to grow and thrive in India.

“All the powers that be in Indian football, should set aside all differences and include this side, whose contribution to Indian football cannot be quantified.”

East Bengal endured a nightmare centenary year, failing to grab any trophy followed by an acrimonious split from their investors Quess Corp. They are presently sponsporless after a protracted battle to get back sporting rights from Quess and are racing against time to fulfill their licensing criteria to play in the upcoming season.

East Bengal unlikely to get entry into 2020-21 ISL

The EB officials are under increasingly stifling pressure to land a plum investor as well as fulfilling all financial compulsions needed to play in the ISL, having announced Goan pro-licence holder Francesco Da Costa  as their next season.

The Red and Golds recently shot off a letter to the ISL organisers requesting them additional time to sort out their administrative woes, including an undertaking to honour obligations of all contracted players, and present their case to play in the ISL.

Several EB players, through the FPAI, have gone to the AIFF Players’ Status Committee in order to receive unpaid salaries.

“Players need more football clubs to play for and earn their livelihood. As such, players and clubs go hand in hand, and both are necessary for the survival of the game. Hence, we need to support clubs too, as and when we deem necessary,” the letter read.

While EB’s letter has evoked no reaction from the ISL organisers, the glamorous tournament is expected to retain its 10-team relegation-exempt structure after Mohun Bagan’s merger with ATK. The new-look ATK Mohun Bagan FC would participate in the November to March scheduled IPL VII, likely to be held in Goa as part COVID-19 pandemic induced health restrictions.

East Bengal, meanwhile, would be celebrating their centenary on August 1, their foundation day, hoping to turn over a new leaf in the ISL-dominated Indian football landscape.