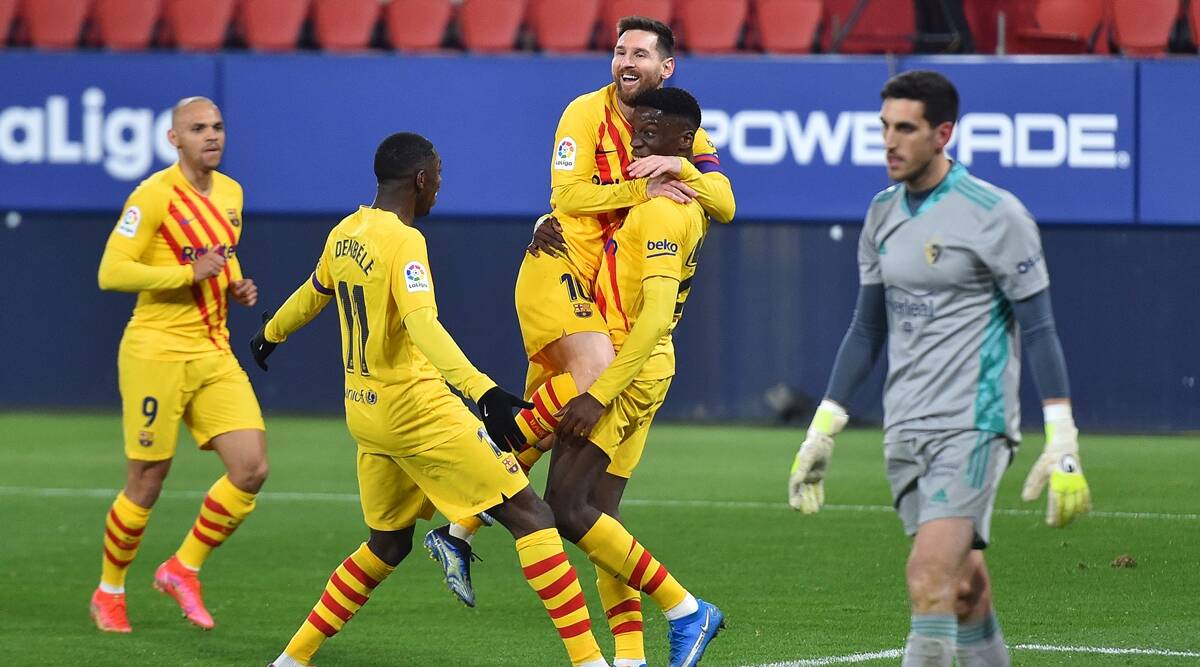 New Delhi: Barcelona continued their rampant run of domestic form to beat Osasuna 2-0 away from home on Saturday and move to within two points of La Liga leaders Atletico Madrid, with Lionel Messi setting up goals scored by Jordi Alba and teenager Ilaix Moriba.

Messi helped Barca take the lead on the half-hour mark when he carved open Osasuna’s defence with a superb cross-field ball to Alba, who controlled before blasting into the roof of the net.

He then laid the ball off when 18-year-old midfielder Ilaix struck in the 83rd minute, producing a confident finish inside the post from outside the area to score his first goal for the club in only his third league appearance.

The victory followed Barca’s heroic second leg comeback win over Sevilla to reach the Copa del Rey final on Wednesday and notched a 13th league win in 16 games, while they are unbeaten since losing at Cadiz on Dec. 5.

The Catalans stay second but moved on to 56 points after 26 games, two points behind Atletico Madrid who have played 24 matches and host third-placed Real Madrid on Sunday. Osasuna are 13th on 28.

“We just needed to keep on winning. It wasn’t our best performance but we played well and we deserved the win,” said Barca coach Ronald Koeman.

“We played with a lot of energy. We were tired, but we put in a professional performance and scored two great goals. I’m very happy, this is a very important run and I hope we stay on this path.”

Perhaps still feeling the effects of the 3-0 win over Sevilla after extra time, Barca took a while to settle and nearly went behind in the second minute. They were spared thanks to the first of three impressive saves from Marc-Andre ter Stegen.

The German had to scurry back to stop an audacious attempt from Osasuna’s Jonathan Calleri, who went for goal from his own half. He also made a truly outstanding save to deny Kike Barja later in the first period, flying to his top right hand corner and throwing up his left hand to swat the ball away.

Having gone through a tumultuous campaign on and off the pitch this season, things are looking up for Barca, who will elect a new president in Sunday’s election.

They then head to France looking for another miraculous Champions League comeback against Paris St Germain for Wednesday’s last-16 second leg, looking to overturn a 4-1 deficit.

“We have to rest now and then we’ll prepare the game. I don’t want to say it’s impossible, and we’ll go there and try to get a good result,” Koeman added.