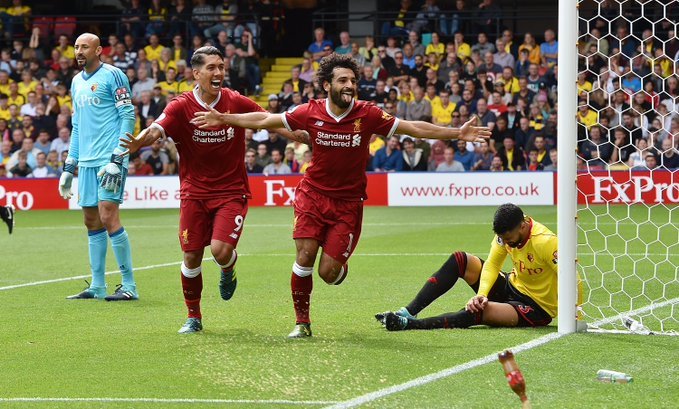 Liverpool: Liverpool began the 2019-2020 Premier League season with the same quality and intensity that brought them to within a point of the title in the last campaign, punishing newly promoted Norwich City 4-1.

The Champions League holders needed less than 30 minutes to build a 3-0 lead on Friday, delighting the Reds faithful at Anfield, which on this occasion included Liverpool’s American owner, John Henry.

Norwich, making their return to the top-flight after three seasons in the second division, had the bad luck to go behind 1-0 in the 7th minute on an own goal by team captain Grant Hanley, who inadvertently redirected a Divock Origi cross into his own net.

Virgil van Dijk made it 3-0 for Liverpool in the 28th minute, heading-in a Salah corner.

10 – Liverpool have registered their 10th consecutive league victory, the fifth time they've had a run of 10+ wins in a row in the top-flight; more than any other side in top-flight history. Dominant. pic.twitter.com/fuftnP1lfK

Origi, the instigator of the first goal, scored one on his own account in the 42nd minute, getting his head to a cross from Trent Alexander-Arnold.

But it wasn’t all good news for Liverpool in the first half, as keeper Alisson Becker had to helped off the field in the 39th minute.

Replacing the Brazilian was Adrian San Miguel, who only joined the Merseyside club from West Ham United a few days ago.

Trent Alexander-Arnold is the first player to assist a goal in 5️⃣ straight #PL appearances since Mesut Ozil in 2015 🔥 pic.twitter.com/Opcky4NQr7

Liverpool’s performance slipped after the break, while the visitors improved, but while Finnish striker Teemu Pukki put Norwich on the scoreboard in the 64th minute, the outcome was never in doubt.

Defending Premier League champions Manchester City will start their season on Saturday with a match in London against West Ham.

The most anticipated contest of the opening weekend is set for Sunday, when Manchester United will host Chelsea at Old Trafford.

Behind the bench for the Blues will be one of the best players in the history of the London club, Frank Lampard, who became Chelsea’s all-time leading scorer while helping the side win three Premier League titles, four FA Cups and the Champions League.