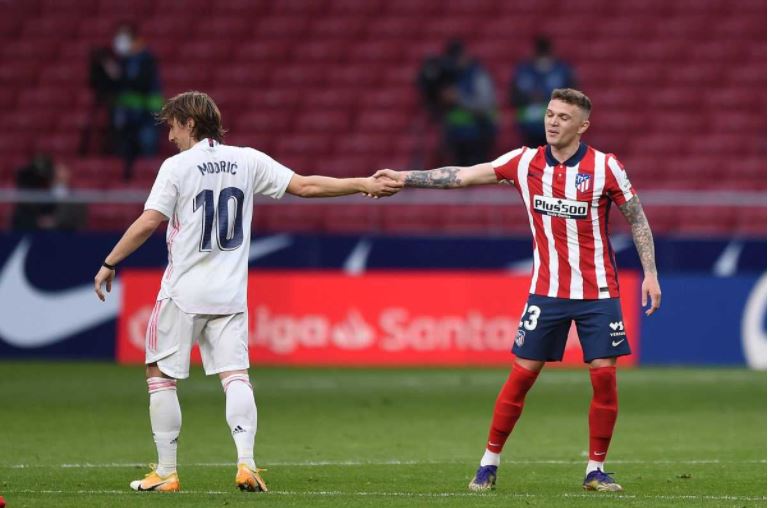 Madrid: Karim Benzema’s 88th minute goal kept Real Madrid in the race for the La Liga title on Sunday as he canceled out Luis Suarez’s opener for Atletico Madrid in a 1-1 draw in the Wanda Metropolitano Stadium.

Suarez’s 14th minute goal, following excellent work from Marco Llorente, looked as if it was going to allow Atletico to open up an eight-point gap over their neighbours in the table, and Atletico were good value for their lead for much of the game on Sunday.

However, after being aggressive for much of the game, they sat deep in the last 15 minutes and allowed Real Madrid to attack them, with Benzema’s goal after an exchange of passes with Casemiro punishing that decision, Xinhua news reports.

The result allows FC Barcelona to move to within three points of Atletico and two ahead of Real Madrid thanks to a 2-0 win away to Osasuna on Saturday night.

Goals from Jordi Alba and Illax Moriba gave Barca a hard-fought win against a rival that caused them lots of problems in the El Sadar Stadium.

Although Osasuna controled the first half-hour of the game, Barca took the lead in the 30th minute when Messi picked out Jordi Alba, who finished with a powerful shot into the top of the net.

Marc-Andre Ter Stegen produced several excellent saves for Barca, the best of which was to deny Ruben Garcia, before young substitute Illax doubled Barca’s lead eight minutes from time with his first goal for the club.

Saturday kicked off with Real Valladolid claiming a vital 2-1 win at home to Getafe, who ended with 10 men after striker Jaime Mata was sent off for kicking out in the second half.

Oscar Plano and Sean Weissman put Valladolid 2-0 ahead within 24 minutes and Mata scored for Getafe eight minutes before half-time.

Sevilla’s nightmare week continued as they suffered with two defeats to Barcelona with a 2-1 defeat away to struggling Elche, who took three vital points with second half goals from Raul Guti and Guido Carillo.

Sevilla’s defeat opened the door for Real Sociedad to close the gap to fourth place to just three points as they beat Levante 1-0. Mikel Merino’s early goal was enough to give the side from San Sebastian a win against a rival that lost the Copa del Rey semifinal after 120 minutes on Thursday, but ‘La Real’ should have won more easily after Mikel Oyarzabal missed a penalty.

Athletic Bilbao followed up qualification for the Copa del Rey final with a 2-1 win at home to Granada. Coach Marcelino Garcia Toral changed all but two of the side that started in the cup and saw Asier Villalibre put his side ahead after three minutes.

Granada controled the ball but rarely threatened, and Athletic should have doubled their lead with 20 minutes remaining but Rui Silva did well to save Raul Garcia’s penalty.

It looked as if that would cost Athletic the win when Jorge Molina levelled for Granada with 12 minutes remaining, but Alex Berenguer’s injury-time thunderbolt gave the home side three vital points.

Elche’s win leaves Eibar in the bottom three after Alvaro Negredo’s goal and Marco Dmitrovic’s penalty miss condemned them to a 1-0 defeat away to Cadiz.

Huesca remain bottom after losing a seven-goal thriller 4-3 at home to Celta. Santi Mina, Nolito, Hugo Mallo and Fran Beltran all scored for the visitors, while Rafa Mir, Siovas and Ferreiro all scored for Huesca in a game that hung in the balance until the final whistle.

Friday night saw Carlos Soler and Goncalo Guedes score late goals as Valencia came from behind to win the east coast derby 2-1 at home to Villarreal.