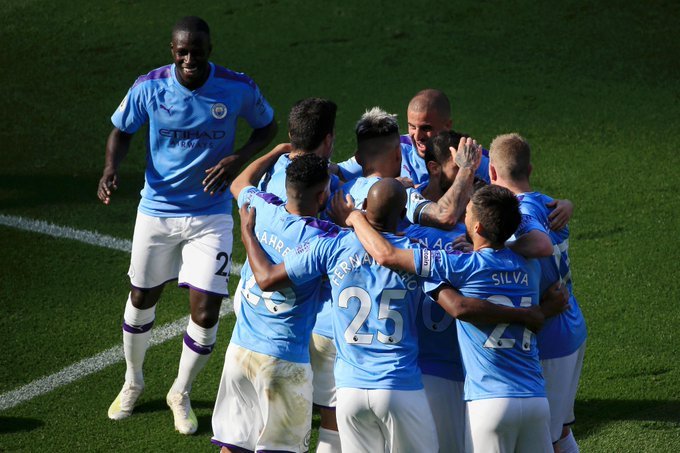 Man City are the defending champions.

London: Manchester City powered to their record Premier League win as the champions scored five times in the first half of an incredible 8-0 thrashing of Watford, while Leicester enjoyed a VAR-assisted 2-1 victory over Tottenham on Saturday.

Inspired by Bernardo Silva’s hat-trick, Pep Guardiola’s side ripped woeful Watford to pieces at the Etihad Stadium, eclipsing a 7-0 success against Norwich in 2013 which stood as their previous biggest top-flight win.

Although City fell one goal short of equalling the biggest Premier League margin of victory — Manchester United’s 9-0 demolition of Ipswich in 1995 — their swaggering display was the perfect way to erase the bitter taste from last weekend’s shock defeat at Norwich.

Second-placed City move to within two points of leaders Liverpool, who face Chelsea at Stamford Bridge on Sunday.

City had crushed Watford 6-0 in last season’s FA Cup final and they picked up where they left off at Wembley with a goal inside the first minute at the Etihad Stadium.

Kevin De Bruyne played a superb ball in from the right, leaving David Silva with the simple task of poking home from close range for his first goal of the season.

The champions doubled their lead in the seventh minute after Watford keeper Ben Foster conceded a penalty with a foul on Riyad Mahrez.

Sergio Aguero coolly slotted in the spot-kick for his eighth goal in six games this term.

Guardiola had rested Raheem Sterling, but even without their star winger City were rampant and they made it three in the 12th minute when Mahrez’s free-kick hit Watford’s Tom Cleverley in the head and deflected past Foster.

By the time Otamendi finished off Aguero’s cross in the 18th minute, City had established the fastest 5-0 lead in the Premier League era.

The joint biggest half-time lead in Premier League history wasn’t enough for City and Bernardo struck again with a close-range finish after another flowing move in the 48th minute.

Bernardo completed his first Premier League treble on the hour with a tap-in from De Bruyne’s cross.

De Bruyne set City’s new record mark in the Premier League when the Belgium midfielder scored the eighth in the 85th minute.

Leicester on the rise

At the King Power Stadium, Leicester proved their credentials to gatecrash the top four as they came from behind to beat Tottenham.

However, the game swung Leicester’s way after Tottenham defender Serge Aurier’s goal midway through the second half was ruled out by the finest of margins for offside by VAR.

The hosts built on that lift immediately as Ricardo Pereira equalised before James Maddison struck the winner from long range five minutes from time.

By contrast, Tottenham have now won just two of their first seven games of the season in all competitions and Mauricio Pochettino admitted the VAR controversy had played a role in their latest flop.

Pochettino bemoaned the momentum swing given to Leicester by the long stoppage in play prior to Aurier’s strike being ruled out for an extremely marginal offside against Son Heung-min.

Sheffield United piled pressure on Everton manager Marco Silva, whose side were booed off after a 2-0 defeat at Goodison Park, the damage done by Yerry Mina’s 40th-minute own goal and Lys Mousset’s 79th-minute strike.

Barcelona sink to shock defeat against Granada in La Liga