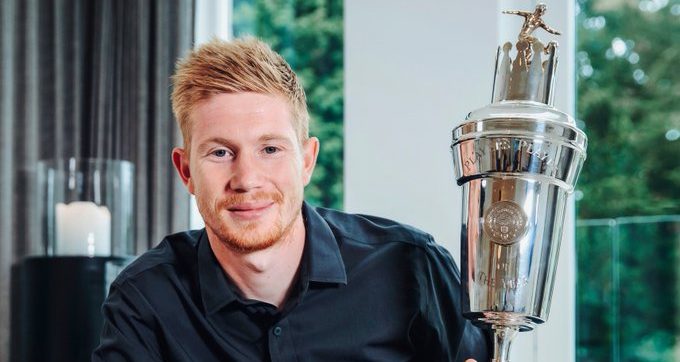 London: Manchester City’s Kevin De Bruyne have been crowned PFA Players’ Player of the Year for 2020.

The Belgium playmaker’s award breaks a two-year run of Liverpool winners, with Virgil Van Dijk and Mohamed Salah having claimed the prize over the previous two seasons.

City trailed the Reds by an eventual 18 points in the 2019/20 Premier League term but De Bruyne, who registered 13 goals and a record-equalling 20 assists, was voted the campaign’s top performer by his peers and he was quick to thank his manager for handing him full creative licence.

“Most of the time he just lets me be me,” the 29-year-old said of Guardiola.

“We speak often about the team but in a lot of senses he knows when he gives the orders of what the team has to do that I will listen.

“But then on the other side he gives me a lot of freedom; I don’t know why, that’s just the way it goes between us. He knows in one way I will always put the team first and then obviously if I can help myself I’m going to do that.

“But he knows that I want the team to win, and if the team wins I will gain from it. So I think in that sense he feels fine and he trusts me completely.

“This is a big honour, to be voted by your colleagues, competitors from other teams who you always play against on the field. That they vote for you for best player; it’s amazing.

“It’s maybe strange that I’m the first one at City, seeing all the good players who played there before and who are still playing. But it’s nice to represent the club.”

Last term’s winner Van Dijk was shortlisted again for his exploits in Liverpool’s title-winning 2019/20 campaign, with his Reds team-mates Sadio Mane, Jordan Henderson and Trent Alexander-Arnold also in the running.

De Bruyne pipped all of those to the accolade, however, and also fought off the challenge of his City colleague Raheem Sterling.

Liverpool’s Trent Alexander-Arnold have been crowned PFA Young Player of the Year for 2020.