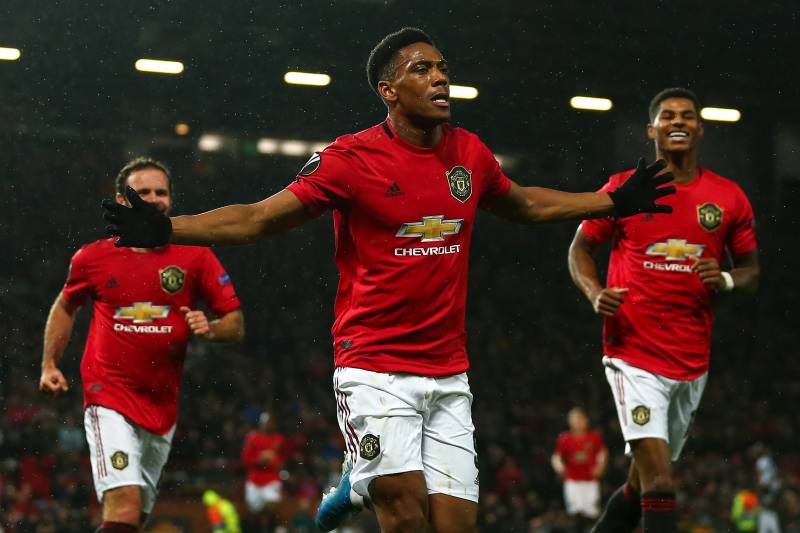 Paris: Teenager Mason Greenwood scored as Manchester United cruised into the Europa League last 32 with a 3-0 win over Partizan Belgrade at Old Trafford, while Celtic stunned Lazio with a last-gasp goal in Rome to progress.

Ole Gunnar Solskjaer’s United knew that a third victory in four Group L games would be enough to send them through.

The 18-year-old Greenwood broke the deadlock in the 22nd minute with a cool finish to score his third goal of the season and second in this competition.

Anthony Martial doubled the advantage after the half-hour mark with a brilliant individual goal, before Marcus Rashford lashed home the third four minutes after the interval.

The comfortable victory saw United bounce back after a 1-0 loss at Bournemouth last weekend had ended a three-game winning run.

AZ Alkmaar thrashed Astana 5-0 in Kazakhstan to keep control of the race for second place in Group L behind United, eliminating their hosts and moving four points clear of Partizan.

But substitute Ntcham latched onto Odsonne Edouard’s pass in the fifth minute of added time and dinked a cool finish over Lazio goalkeeper Thomas Strakosha.

The other game in the group saw CFR Cluj move to within a point of qualification by beating Rennes 1-0 in Romania.

Celtic’s Old Firm rivals Rangers gave their hopes of reaching the knockout stage for the first time since 2011 a massive boost with a 2-0 victory over Porto at Ibrox.

The German club moved second in Group J, ahead of Roma on head-to-head and two points behind leaders Istanbul Basaksehir, who saw off 10-man Wolfsberger 3-0 in Austria.

Nuno Espirito Santo’s men now sit five points clear of Slovan in second in Group K, with Braga a point ahead of the Premier League side at the top after beating Besiktas 3-1.

Record five-time winners Sevilla knew victory in Luxembourg would send them through from Group A and their one-sided win also sealed top spot.

PSV Eindhoven, the 1978 winners, suffered a humbling 4-1 defeat by Austrian team LASK Linz to slip to third in Group D behind their opponents and Sporting Lisbon, who won 2-0 at Rosenborg.

Elsewhere, Espanyol moved to the brink of qualification by hammering nine-man Ludogorets 6-0, while Gent moved top of Group I with a 3-1 win at Wolfsburg.