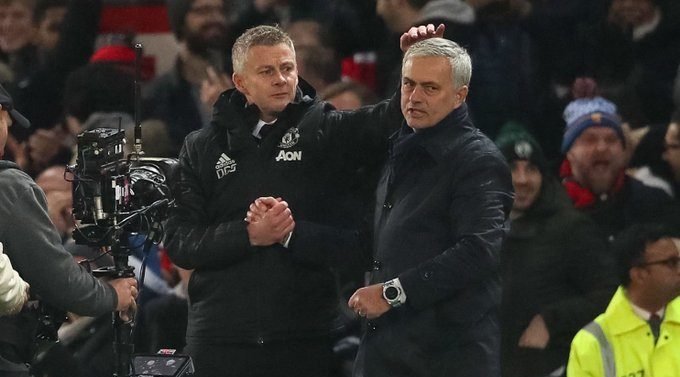 London: Jose Mourinho endured an unhappy return to Manchester United as Marcus Rashford struck twice in a 2-1 defeat for Tottenham while Liverpool maintained their eight-point lead at the top of the Premier League, putting five goals past Everton.

Second-placed Leicester equalled their top-flight league record of seven consecutive wins with a 2-0 victory against bottom side Watford while Chelsea bounced back from two consecutive league defeats to beat Aston Villa 2-1.

Mourinho’s first loss since taking charge of Spurs eases the pressure on Ole Gunnar Solskjaer as United moved above Tottenham, up to sixth in the table.

Rashford smashed United into an early lead with the help of some poor goalkeeping by Paulo Gazzaniga, the England international’s powerful shot creeping in at the near post and he had chances to extend the lead.

Yet for all United’s dominance in the first 45 minutes, one moment of brilliance from Dele Alli pulled Mourinho’s men level before the break.

Alli plucked the ball out of the air and skipped beyond two United defenders with one touch before slotting home his fourth goal in as many games since Mourinho took charge.

United were handed the chance to retake the lead when Rashford went down under Moussa Sissoko’s challenge in the penalty area early in the second half and he put his recent spot-kick woes behind him to send Gazzaniga the wrong way.

“The three points are massive for us,” said Solskjaer.

“We’ve had too many draws this season and given too many points away from winning positions. It’s a great lesson the last two games (Sheffield United and Aston Villa) and we came back in a great manner.”

Mourinho, sacked by United last December, described his reception at Old Trafford as “nice and polite”.

“It’s a step back against a team that is playing with the same objective as us, trying to get up the table and reach the top six,” he said.

“We need to keep going. We made mistakes but it’s not good to be crying about them now.”

Liverpool emphatically restated their title credentials by thrashing their city rivals 5-2, surging eight points clear of Leicester after their 14th win in 15 games. Manchester City, in third place, are 11 behind the leaders.

All but one of the goals came in a frantic first half at Anfield as Divock Origi and Xherdan Shaqiri, who replaced the rested Roberto Firmino and Mohamed Salah, put Liverpool 2-0 up inside 17 minutes.

Michael Keane pulled a goal back for Everton before Origi got his second and Sadio Mane finished off a blistering counter-attack to make it 4-1.

The scoring did not stop there as Richarlison cut the deficit once more, but Georginio Wijnaldum hammered the final nail in the Everton coffin as an eighth defeat in 11 league games sees the Toffees slip into the bottom three.

“Wonderful goals, sensational passes, super pieces of football. I loved it a lot.

“We needed fresh legs and I had to show my respect to the boys in the squad, that’s all. They proved it. It is much more fun making changes, all of the boys are ready to deliver performances like this.”

Leicester moved back above City as Liverpool’s closest challengers.

Brendan Rodgers’ side were awarded a penalty after the break when Jonny Evans went down clutching his face inside the area and Jamie Vardy made no mistake, scoring for the seventh straight game.

Chelsea forward Tammy Abraham, who was prolific during a loan spell at Aston Villa last season, proved the difference against Villa, heading in Reece James’s cross to open the scoring.

Trezeguet bundled home to bring the visitors level before the break, but Abraham then turned provider by chesting down for Mason Mount to brilliant volley high past Tom Heaton.

Wolves, in fifth place, remain unbeaten in the league since September and goals from Leander Dendoncker and Patrick Cutrone either side of half-time gave them a 2-0 win against a disappointing West Ham at Molineux.

Southampton moved out of the bottom three with a 2-1 win against fellow strugglers Norwich.

ISL: Bengaluru move to top with narrow win over Odisha