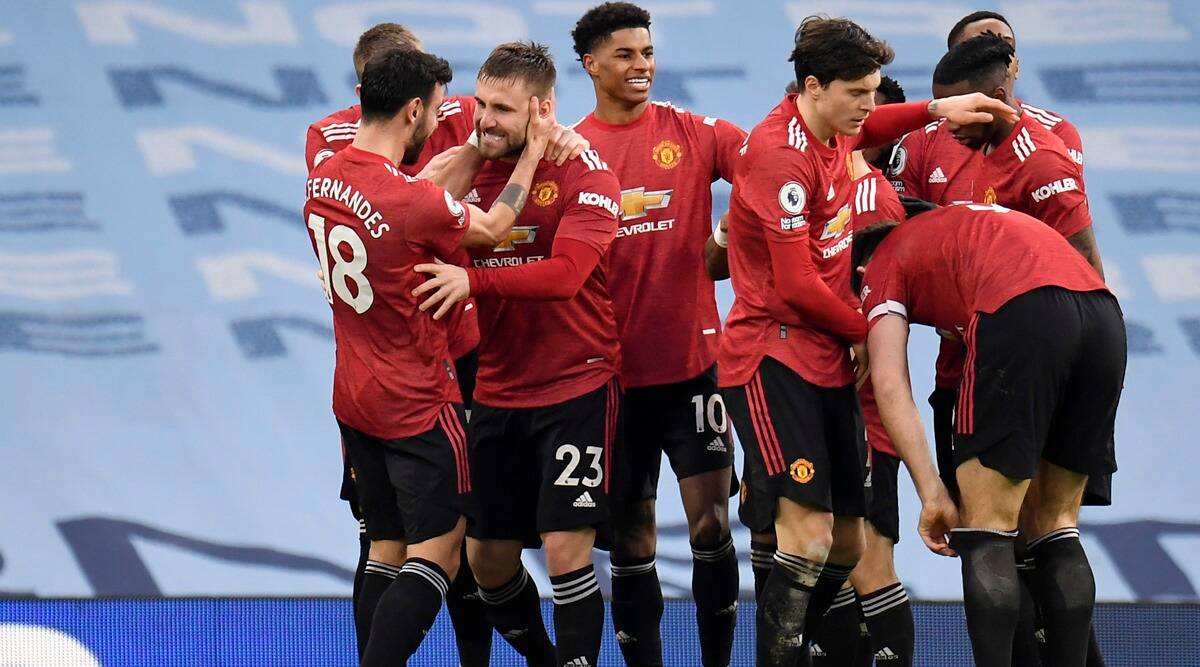 United won thanks to an early penalty from Bruno Fernandes and a second-half strike from Luke Shaw with the result narrowing City’s lead at the top of the table to 11 points over United with 10 games remaining. It was City’s first defeat in all competitions since Nov. 21.

Pep Guardiola’s side may prove to be uncatchable in the title race but United will take real belief for next season from a deserved victory.

Solskjaer is starting to become something of a nemesis for Guardiola — this was the Norwegian’s fourth derby victory since he took over at Old Trafford in December 2018.

City were stunned after 34 seconds when referee Anthony Taylor pointed to the penalty spot after Gabriel Jesus had brought down Anthony Martial just inside the box.

Fernandes took the penalty with Ederson getting his right hand to the shot which squeezed in the corner to give the visitors the lead.

City had an appeal for a penalty turned down when Raheem Sterling tangled with Fred in the area and Riyad Mahrez went close just before the break.

After the interval, Rodri went closest to a leveller with a side-footed shot from the edge of the box which struck the top of the post.

Henderson threw a clever and fast ball out to Shaw on the left, who burst past two City defenders and, after a swift exchange with Marcus Rashford, drove into the bottom far-corner.

“They are difficult on the ball and tough to play against. Today we did almost everything perfect,” said Fernandes.

“Scoring in the first minute was perfect, we had more space to counter. We remained focused until the end of the game. When we defend well we know we’ll have chances to score,” he said.

Guardiola was generous in his assessment of his cross-city rivals.

“It was a fantastic game. United make incredibly high pressing and they are so fast on the counter. We played good. Unfortunately we couldn’t be clinical up front so we congratulate United,” he said.

“We will be the news because we lost. But the news is 21 victories in a row. There are still 30 points to play and we have to start to win again.”

Two goals apiece from Harry Kane and Gareth Bale helped a resurgent Tottenham Hotspur to beat Crystal Palace 4-1 and move into sixth spot in the Premier League on Sunday.

The on-loan Bale provided more evidence that he has rediscovered his spark with Tottenham’s first and second goals either side of Christian Benteke’s equaliser on the stroke of halftime.

But he was outshone by the magnificent Kane who ended with two goals and two assists.

Kane’s first goal, which put Tottenham 3-1 ahead shortly after halftime, was a sublime curler from distance and his second was a tap-in before he was substituted.

Tottenham’s third successive league win lifted them above Liverpool and West Ham with 45 points from 27 games, two points behind fourth-placed Chelsea who play Everton on Monday.

Palace’s first defeat in four games left them in 13th place with 34 points from 28 games, eight points above third-from-bottom Fulham.