Masters: Molinari keeps his stranglehold on proceedings as Tiger lurks 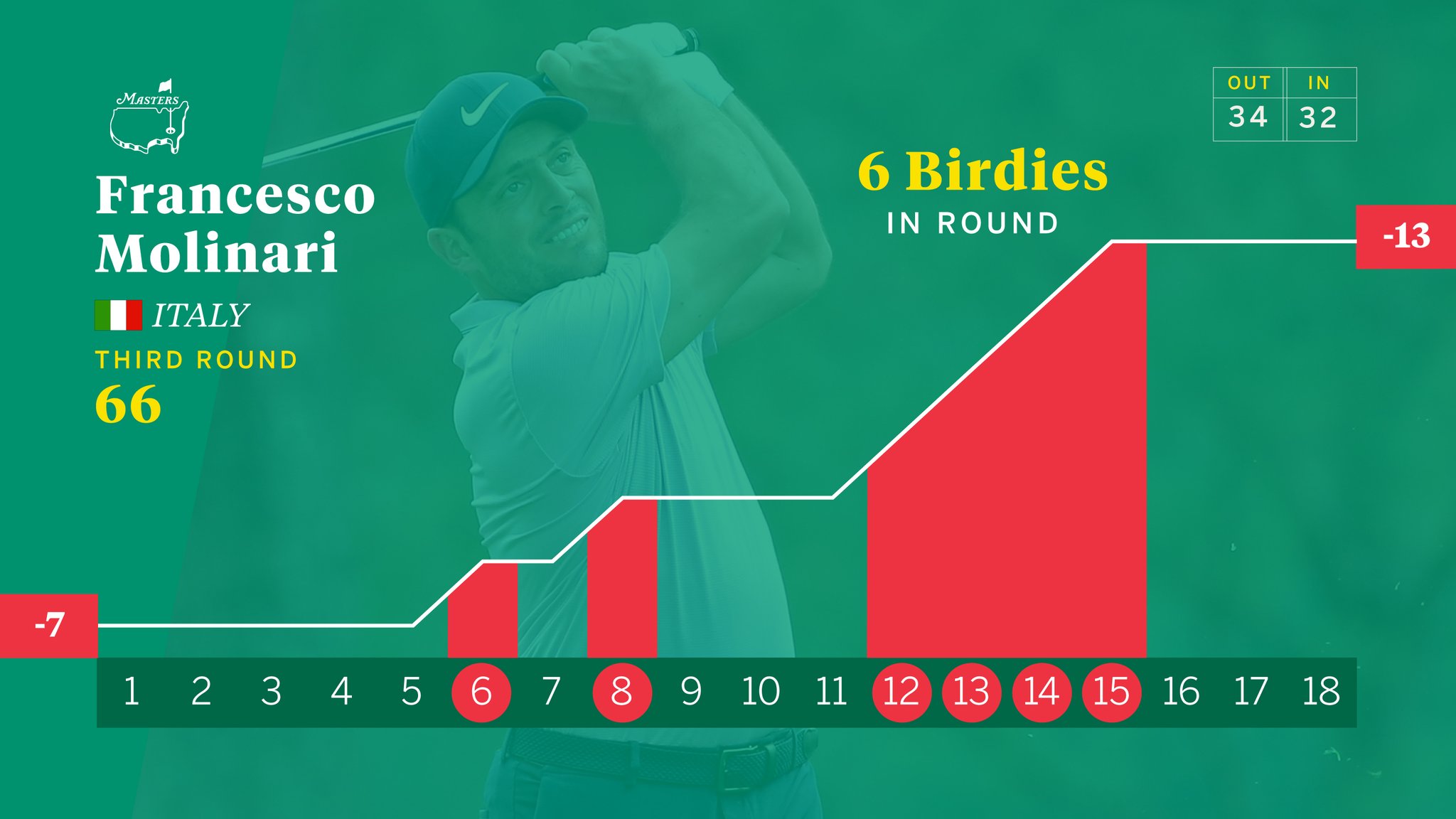 Italy's Francesco Molinari is holding a two-shot lead going into the final round of the Masters at Augusta National. Photo: Twitter @TheMasters

Augusta, Georgia: The last time he went head-to-head against Francesco Molinari at the 2018 Open Championship, Tiger Woods could not surmount a one-shot lead. He now faces a hurdle double the size against the unflappable Italian when the final round of the 83rd Masters Tournament is played on Sunday.

The 14-time Major champion started his third round on Saturday one shot behind Molinari, and even though he shot a fabulous five-under par 67, he fell further behind as the reigning Open champion went one shot better for a bogey-free six-under par 66. Going into the final round, Molinari was leading at 13-under par and Woods tied second at 11-under.

An impending thunderstorm in the afternoon has forced Augusta National Golf Club to send out the players in threeballs and use both the tees. The third player in the leadergroup will be the long-hitting Tony Finau, who tied the tournament record for the best front nine (30) before closing with a superb eight-under par 64 for 11-under total.

Even par for his round through six holes, @WebbSimpson1 made six birdies and an eagle over his final 12 holes to card one of three 8-under-par 64s on the day. pic.twitter.com/kMZfWjLTvq

Finau was one of three players to shoot 64. The other two being Webb Simpson and Patrick Cantlay. Simpson improved to tied fifth place at nine-under par alongside England’s Ian Poulter (68).

By the end of the third round, @F_Molinari had gone 43 holes without a bogey and held a two-stroke lead in #themasters. pic.twitter.com/QpNPRGYSaK

Molinari is now bogey-free for the last 43 holes at Augusta National. On Saturday, he made two long putts to save pars early in the round, and then eased into the birdie mode with two in the front nine. However, he caught after the 11th and made four birdies in a row after hitting his tee shot to less than a foot on the par-3 12th.

“I played slightly better yesterday, but today, I was very good mentally. Made two big putts on 4 and 5 to save pars, and that kind of got me going from there,” said Molinari, who caddied for his brother Edoardo when the latter qualified to play the 2006 Masters as US Amateur winner.

“Played the back nine probably as good as I’ve ever played over here, so really pleased about that.

“I was happy with the whole round but would say the most important shots were probably the two par putts on 4 and 5, just because it’s the beginning of the round. You keep the momentum on your side if you make them.  If you drop shots there, it kind of changes the whole round.”

Molinari was paired with Woods at Carnoustie last year and beat him by a couple of shots on the final day despite Woods having taken the lead at one stage.

But the Italian world No7, who also won the Arnold Palmer Invitational this year, said he did not think the memories of Carnoustie would help him on Sunday.

“I think every tournament is different, and every time is a different story,” he explained.

“He obviously loves this place, and he’s playing great golf. So, I’m aware that it’s not going to be easy tomorrow. I can just do my best.  But it’s not like I can only worry about him.  There’s a lot of guys I think in with a chance.  We all know that a few shots’ lead really don’t mean too much, and we’ve seen today that you can shoot 7‑, 8‑under on this course.”

Woods, who last won a Major in 2008 (US Open), had a slow start and was one-over after five holes, but said he kept patient instead of getting frustrated by a slew of low scores all around him.

“I told myself ‘Just be patient’. The golf course is certainly gettable, a lot of scores going out there. So, just be patient and let the round build,” said Woods.

“I just did everything right. I drove it well and hit my irons well. I made some putts. I didn’t need to go after every flag…just put the ball in the correct spots so I can have gettable looks and gettable putts.  And I was able to do that and keep the ball below the hole as best as I possibly could.”

Woods said he was happy to be in contention for a third straight Major championship.

“It’s been a while since I’ve been in contention here at the Masters. But then again, the last two Majors counts for something. I’ve been in the mix with a chance to win Majors in the last two years.  And so that helps.

“It will be interesting to see if that wind comes up like it’s forecast. Anything around 15-20 miles an hour around this golf course is going to be testy. You’ve got to be committed, hit the proper shots and then hopefully time it right.”

Rory McIlroy, the world No3 who needed to win this week to complete his career grand slam, had another up-and-down round that comprised of one eagle, four birdies and five bogeys for a one-under par 71 round and was tied 39th, 12 shots behind the leader.