Me and Pietersen never got on as individuals, says ex-England spinner Swann 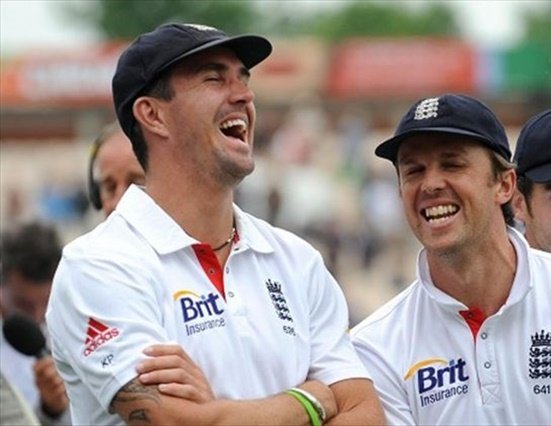 London: There was no love lost between him and Kevin Pietersen during their playing days but when it came to winning games of cricket for England, they forgot their personal dislike for each other, said the former England off-spinner Graeme Swann.

Part of a hugely successful English side, Swann and Pietersen had played pivotal roles in England reaching the pinnacle in the world rankings and claiming the Ashes series both home and away.

“We are a team that got to number one in the world, and in a team there are always going to be individuals. Ninety-nine per cent of that side were all in it for the team,” the former off-spinner said in a podcast called ‘In the Pink’.

One of the best England batsman, Pietersen was a controversial figure in the team. He had a brief stint as England captain in 2008 when he lead the team in three Tests and 10 ODIs.

But he had to step down after an ugly spat with then coach Peter Moores.

Swann, who grabbed 255 wickets in 60 Test matches, said despite his differences, he shared Pietersen’s lack of respect for authority and wanted him in the team for his batting prowess.

“With Kevin Pietersen, we had a situation where he had been captain before and didn’t much like establishment and rules,” said Swann, who had announced his retirement from international and first-class cricket during a 0-5 defeat in Australia in 2013.

“We were actually very similar in that way, and we actually got on me and KP professionally better than most people because we very honest with but openly disliked each other. But wanted each other in the team.”

“I wanted a KP in the team because he was scoring a lot of runs and playing really well, and simply he was one of the best batsmen in the world.”

Pietersen, who was axed from the national side after England’s Ashes defeat in Australia in 2013-14, had stirred up a controversy when he had sent a series of notorious text messages, criticising then skipper Andrew Strauss and coach Andy Flower, to some of the South Africa players during the Headingley Test in 2012.

“There were times when it was all exterior things like the texting against Andrew Strauss,” Swann said.

“And then subsequently he says he did but only because they’re my mates, that certainly didn’t help things.”