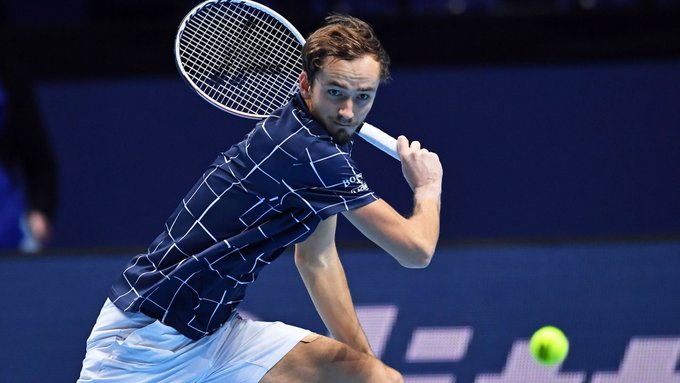 Djokovic will next face 12th seed Canadian Auger-Aliassime, who made his first major semifinal at the US Open after Spanish giant-killer Carlos Alcaraz retired due to an injury trailing 6-3, 3-1.

The Russian, who captured his 200th career win in the first-round victory against Richard Gasquet of France, had not dropped a set before Tuesday.

The world No. 2 played with confidence against van de Zandschulp, firing 36 winners and winning 83 per cent (54/65) of first-serve points as he raised his level in the fourth set to advance after two hours and 22 minutes.

“First two sets he was missing and I was controlling the game,” Medevedev said. “But then he started missing less and hit with more power and played more aggressively. The break point he won he hit a forehand winner, so it became a lot tougher for me.

“I am happy with my game in the fourth set because on my first serve, I only lost two points and I always felt under pressure. Then at 6-5 he got a little bit tight, and I managed to do it without the tie-break, which is helpful,” Medvedev told atptour.com.

Chasing his maiden Major title, Medvedev remains on course for a potential blockbuster final against world No. 1 Novak Djokovic, who is aiming to capture the Grand Slam at the US Open. The 25-year-old will first have to overcome a tricky test against either 12th seed Felix Auger-Aliassime in the last four.

The Russian has a strong record at the USTA Billie Jean King National Tennis Center. In 2019, Medvedev reached his maiden major final in New York, rallying from two sets down to force a fifth set against Rafael Nadal in the championship match before falling short. He also advanced to the semi-finals without dropping a set last year before losing to eventual champion Dominic Thiem.

“In 2019 was my first Slam breakthrough, so already New York is in my heart, especially with the final against Rafael [Nadal],” Medvedev said.

“Then last year, I still reached the semi-finals, losing to Dominic [Thiem] who played amazingly. I just want to do a little bit better than the last two times and get over this last little step, which is the toughest one.”

Medvedev captured his fourth ATP Masters 1000 title in Toronto and enjoyed a run to the last four in Cincinnati before arriving at Flushing Meadows last week. The Russian, who has also lifted trophies in Marseille and Mallorca this year, now holds a 16-2 record since Wimbledon.

“Botic played so many tough matches and today he was able to still come back and in the fourth set, anything could have happened,” Medvedev added.

“It was an amazing level from him and if he continues to play like this he is going to be Top 50 minimum.”