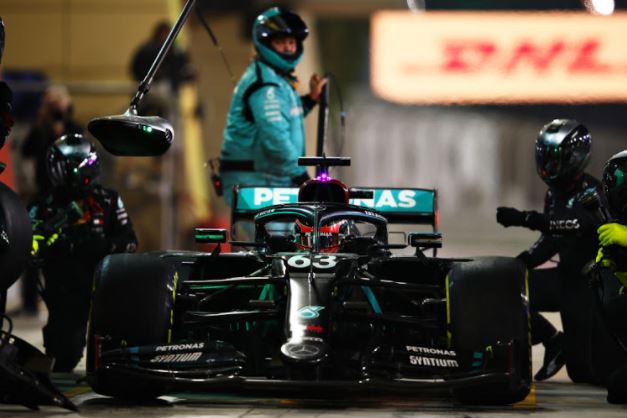 Sakhir (Behrain): Formula 1 champions Mercedes have been fined 20,000 euros after they fitted the wrong tyres to George Russell’s leading car at a bungled Sakhir Grand Prix pitstop where Sergio Perez emerged as victorious.

Standing in for Lewis Hamilton after the world champion tested positive for Covid-19, Russell on Sunday took the lead from teammate Valtteri Bottas at the start and seemed set for a fairy-tale debut triumph.

However, during the race Mercedes called both drivers in for a precautionary pit stop, but put a wrong mix of tyres on Russell’s car before realising their mistake halfway through Bottas’ stop.

This meant Russell had to pit again the following lap to fit a correct set, while Bottas was sent back out on his original rubber after an agonising 27-second wait.

“This is clearly a breach of the regulations and would normally involve a sporting penalty up to disqualification,” said the stewards in their ruling as per formula1.com.

However, the FIA, instead of sanctioning the driver, fined the team because they said “in this case there are mitigating circumstances, additional to the radio issue referred to above”.

As a result, the Briton keeps his first points and has moved to 18th in the drivers’ championship.

The next and final round of the 2020 F1 season is the Abu Dhabi Grand Prix on December 13 at the Yas Marina Circuit.