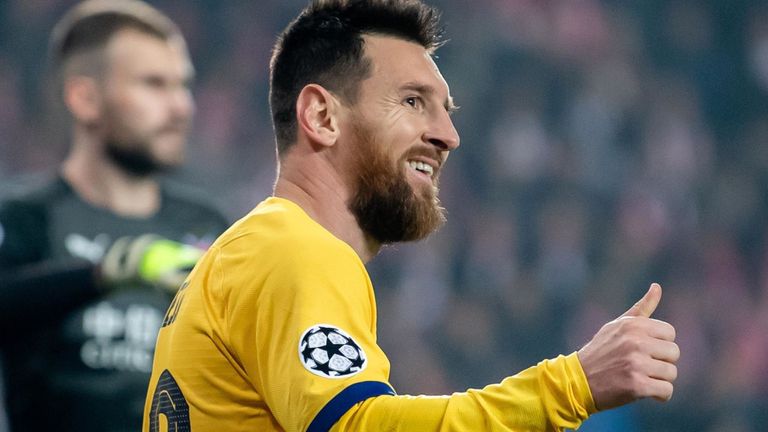 Messi opened the scoring after three minutes, beating Slavia goalkeeper Ondrej Kolar with a low left-footed shot to become the first player ever to score at least once in 15 consecutive Champions League seasons.

The 32-year-old Argentinian first robbed midfielder Petr Sevcik outside the Slavia box before an exchange with Arthur put him neatly through the static Slavia defence.

Barca earned a second on 57 minutes when Slavia winger Peter Olayinka deflected a Luis Suarez close-range shot from an impossible angle into his own net as the hosts failed to clear Messi’s free kick.

Olayinka sealed Barca’s sixth straight competitive win but deprived Suarez of a goal that would end his four-year drought in away games in European cup competitions.

Before that, left-back Jan Boril equalised for Slavia five minutes after half-time, capitalising on a superb pass threaded by Lukas Masopust that found him one-on-one with goalkeeper Marc Andre ter Stegen.

Barcelona top Group F with seven points from three games and are three ahead of Inter Milan who beat Borussia Dortmund 2-0. Slavia sit at the bottom with a single point.

In Genk, Jurgen Klopp admitted his delight for Alex Oxlade-Chamberlain as the midfielder made the most of a rare start by scoring twice in Liverpool’s 4-1 Champions League win over Genk in Belgium.

The England international, who missed almost all of last season due to injury and has been used sparingly in this campaign, opened the scoring in the second minute at the Luminus Arena.

He then scored the visitors’ second, a sumptuous finish also from outside the box, just before the hour.

Sadio Mane and Mohamed Salah added further goals for the holders before substitute Stephen Odey pulled one back for Genk.

In Salzburg, Belgium attacker Dries Mertens beat Diego Maradona’s tally of 115 goals for Napoli to help his side beat Salzburg 3-2.

Mertens, 32, who joined the Italian club in 2013, is now just five goals behind Marek Hamsik who has the all-time Napoli goals record of 121.

In Amsterdam, Chelsea showed that their young side were ready for the European stage after Michy Batshuayi’s late winner fired them to a 1-0 Champions League win at Ajax that puts them square in the fight for the knockout stages.

Substitute Batshuayi struck in the 86th minute to seal a hugely impressive win in Amsterdam that puts Chelsea level on six points with last year’s semi-finalists at the top of Group H.

In Milan, Lautaro Martinez and Antonio Candreva scored in either half to boost Inter Milan’s Champions League last 16 hopes on Wednesday with a 2-0 win over Group F rivals Borussia Dortmund.

Argentina forward Martinez continued his fine form scoring after 22 minutes in the San Siro, but missed a chance for a second from the penalty spot eight minutes from time.

Candreva sealed the three points a minute from time to move Antonio Conte’s side off the bottom of Group F.

Coro on target as FC Goa thump Chennaiyin in ISL