Messi scores on return as Argentina edge Brazil in friendly 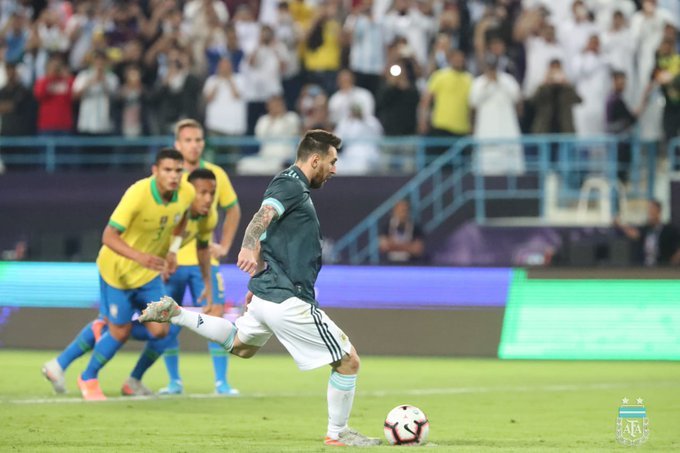 Riyadh: Lionel Messi was on target for Argentina in a 1-0 friendly win over Brazil on his return to international action.

The Barcelona captain made his first appearance since the Copa America and opened the scoring early on in the game after winning a penalty following a foul by Alex Sandro.

Goalkeeper Alisson actually saved Messi’s spot-kick but could not prevent the forward from tapping home the rebound on 13 minutes.

Brazil had already missed a penalty of their own by that point. Gabriel Jesus calmly rolled his spot-kick just wide after being brought down by Leandro Paredes minutes earlier.

There were no other goals in a sloppy first half, although Messi did force Alisson into another save with a low shot from distance just before half-time.

The second-half predictably saw a raft of substitutions. Arthur went off on 55 minutes and was replaced by Liverpool midfielder Fabinho.

Messi went close to grabbing his second with a free-kick on 66 minutes. He curled an effort over the ball but saw Alisson just manage to tip it over the crossbar.

The Liverpool goalkeeper also had to be alert to push a shot from Paredes over the bar after good work from Germán Pezzella, while Lautaro Martinez fired a good chance over shortly afterwards.

Brazil had a chance to grab a late equaliser in stoppage time when Rodrygo crossed for Wesley, but he was let down by a poor first touch as Argentina secured the win.

La Albiceleste now go on to to face Uruguay in Israel on Monday, while Brazil play South Korea in Abu Dhabi on Tuesday.