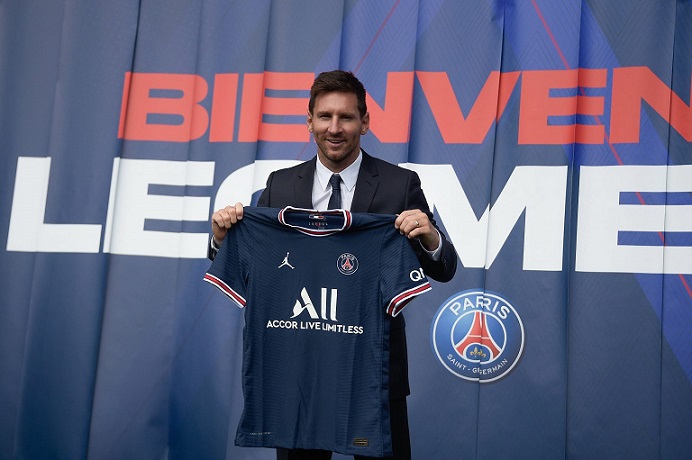 Lionel Messi finally has something Kylian Mbappé already had with a World Cup winners’ medal. Now Mbappé wants what Messi has won many times: the Ballon d’Or. After their fascinating duel in a wild World Cup final, the tournament’s best player Messi and its top scorer Mbappé are firm front-runners to win the next men’s Ballon d’Or.

Call it Messi vs. Mbappé part II, and it continues Wednesday when the Paris Saint-Germain teammates face Angers in a French league game. Messi was given an extended break back home in Argentina after the World Cup but has resumed full training and PSG coach Christophe Galtier hopes he’ll be ready to play.

Because they play for the same team, their rivalry could intensify over the rest of this season.

The 35-year-old Messi has won a record seven Ballon d’Or trophies given to the best player in Europe. Only five Frenchmen — including Zinedine Zidane and Karim Benzema — have won it but the 24-year-old Mbappé has never been on the podium.

Mbappe made his goals clear while at the ceremony when Benzema won: “For me, of course, it’s an objective to win one or many of them. But of course, there’s a process to reach that. I think I’m on the right track.”

A challenger this time could be prolific Manchester City striker Erling Haaland, but he didn’t play at the World Cup — let alone star in it — after Norway failed to qualify.

Mbappé won the 2018 World Cup with France when he was just 19. Messi waited agonizingly long to get his hands on the Jules Rimet trophy, losing in the 2014 final. He did so in style last month when Argentina beat France to win its third World Cup title in arguably the most intense final in the tournament’s 92-year history.

Messi’s two goals in the final capped a remarkable tournament where he scored seven times, finished as the best player and reached a whopping 98 goals overall for Argentina. The good news for Argentina fans is that he wants to play a little while longer wearing the Albiceleste jersey.

Mbappé, meanwhile, became only the second player to score a hat trick in a World Cup final and finished one ahead of Messi on eight goals as the tournament’s top scorer — the first to reach that haul since Brazil’s Ronaldo in 2002.

Mbappé’s overall tally of 12 World Cup goals puts him level with Brazil great Pelé — and one behind Messi and Frenchman Just Fontaine, the single-tournament record holder with 13 in 1958. Former West Germany striker Gerd Mueller (14), Ronaldo (15) and record holder Miroslav Klose of Germany (16) are well within Mbappé’s sights considering the young Frenchman may have three more World Cups ahead of him.

By the 2026 World Cup, Mbappé should also be well in front as France’s all-time leading men’s scorer. He currently has 36 goals and World Cup teammate Olivier Giroud leads Les Bleus with 53. By the time the next World Cup comes around, Messi will be nearly 39 and perhaps retired from soccer altogether.

So the coast is clear for Mbappé to pulverize World Cup scoring records.

But before he starts thinking about that he has the pressing matter of the first Ballon d’Or to win, and it’s a tall order with Messi as his main rival. But what a treat in store for French soccer fans if they both keep raising their game. Mbappé played for PSG 10 days after losing the final in Qatar, showing great determination to put that defeat behind him.

The Ballon d’Or race has the makings of a classic contest between the teammates since they were both in fine form for PSG before heading to the World Cup.

Mbappé tops the league scoring charts with 13 goals and Messi is tied with PSG teammate Neymar for the most assists (10). Mbappé is the co-top scorer in the Champions League with seven goals, while Messi again heads the assists chart with four.

Messi won the Champions League four times with his former club Barcelona, where he became a superstar and scored 672 goals before joining PSG last season.

PSG has never won the Champions League and this could prove a key factor in Ballon d’Or consideration — especially if Mbappé leads the French giant to the European title.

If Messi doesn’t play Wednesday at home, PSG’s next game is at Rennes on Sunday. “He had an extraordinary World Cup with a lot of physical effort and challenges,” Galtier said. “We hope he’s ready for (Angers).”