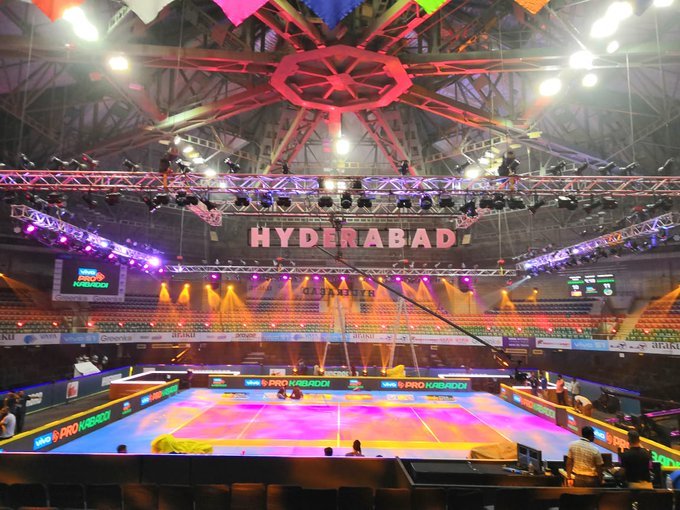 A total of 12 teams are playing in PKL 7 and the final will be played on October 19.

New Delhi: Defending champions Bengaluru Bulls initiated their Pro Kabaddi season 7 on a positive note but were upstged in their second match while U Mumba edged Telugu Titans in the opening fixture of the tournament at the Gachibowli Indoor Stadium in Hyderabad.

In the first match, U Mumba defeated Telugu Titans 30-25. Abhishek Singh’s and Fazel Attrachali’s strong performance evolved a comfortable victory for U Mumba.

Telugu Titans managed the first super tackle of the match in the 38th minute but still trailed 22-30. U Mumba continued their persistence and they clinched to a 30-25 victory in the end. U Mumba will start their home leg from July 27.

Hyderabad, ready for the Panga on the #WorldsToughestDay? Join us for the action, 7 PM onwards, on Star Sports and Hotstar. #IsseToughKuchNahi pic.twitter.com/gEp0W5Q59N

The Bulls maintained their class and strength to crush Patna Pirates 34-32. Stalwarts Amit Sheoran (5 points) and Ashish Sangwan (4 points) were the catalysts of Bulls’ victory.

In the 34th minute, the Bulls produced an all-out to lead 30-26 and Patna ended up with defeat in their first encounter of the season.

In the third match-up of the tournament, Gujarat Fortunegiants defeated Bengaluru Bulls 42-24. Captain Sunil Kumar, Sumit and GB More displayed a top-notch performance and Sonu’s excellent raid in the 32nd minute turned the fate of Gujarat. The Bulls were all out while trailing 21-36 and ended up losing the match.

Tamil Thalaivas defeated Telugu Titans 39-26, having led 20-10 till the conclusion of the first half. In the last five minutes of the match, Rahul clinched three consecutive successful raids as Thalaivas led 33-20.

There are total 12 teams in season seven and final will be played on October 19.