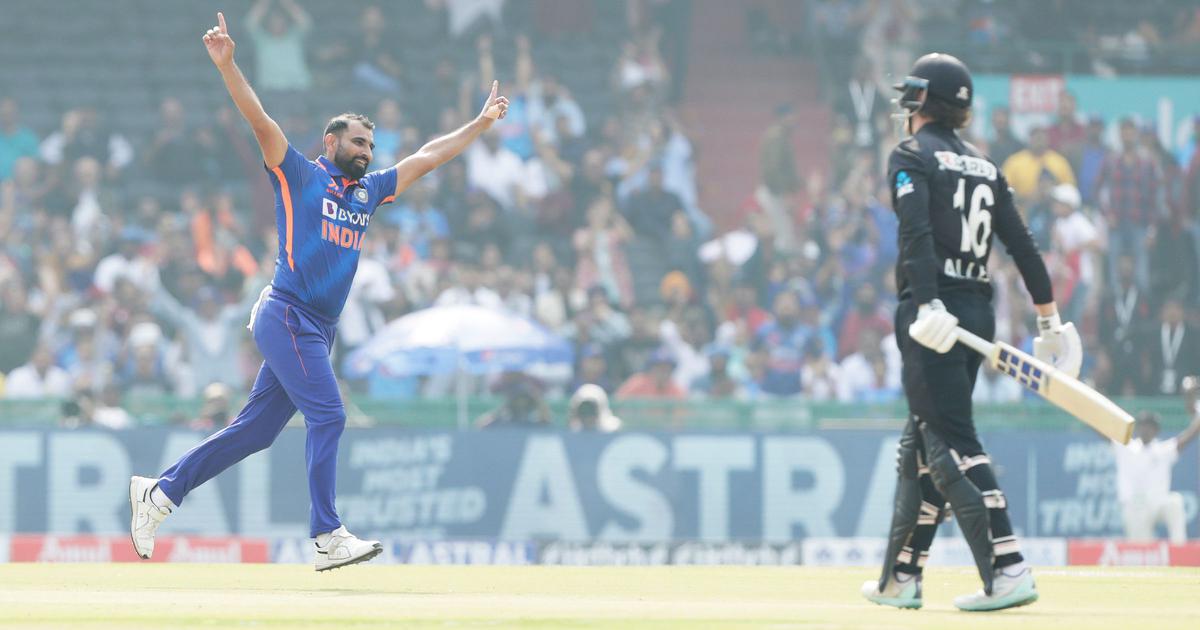 Mohammed Shami led an inspired pace attack to set up a crushing eight-wicket, series-clinching win for India in the second One Day International against New Zealand on Saturday.

Shami, India’s pace spearhead, returned figures of 3-18 to help dismiss the Black Caps for 108 after the hosts elected to bowl first in Raipur.

Skipper Rohit Sharma made 51 and Shubman Gill an unbeaten 40 as India romped home in 20.1 overs to take an unassailable 2-0 lead in the three-match series.

At the toss Rohit took a while to announce his decision to field and told the presenter he “forgot” about the team call.

But things soon turned serious when Shami struck in the first over and with his fellow quicks had the tourists reeling at 15-5 by the 11th over.

Glenn Phillips made 36 as he combined with the middle and lower-order batters including Michael Bracewell (22) and Mitchell Santner (27) to take the total past 100, but the innings lasted only 34.3 overs.

Shami bowled Finn Allen on the fifth ball of the first over at a venue making its international debut.

Mohammed Siraj sent back Henry Nicholls, caught at slip for two, before Shami and Pandya took two wickets caught-and-bowled to rattle the visitors, whose skipper Tom Latham fell for one.

Phillips and Bracewell attempted to rebuild and hit back in a 41-run sixth-wicket stand before Shami broke through.

He got Bracewell, who hit 140 in his team’s 12-run loss in the opener, caught behind.

Phillips kept up the defiance in another partnership with the left-handed Santner. The pair put on 47 before Pandya bowled Santner.

Phillips departed in an attempt to hit out spinner Sundar only to be caught at mid-wicket, and the innings soon folded.

The Indian openers Rohit and Gill, who hit a match-winning 208 in the opener, put on 72 runs for the opening wicket.

Rohit struck some delightful boundaries including a six off his trademark hook shot to ease into the target.

He kept up the charge as he reached his 50 in 47 balls but soon fell lbw off fast bowler Henry Shipley.

Virat Kohli hit a few boundaries before he was stumped by Latham off Santner for 11.

Gill hit the winning four with the left-handed Ishan Kishan at the other end.

The final match is on Tuesday in Indore.

India, Bangladesh, Nepal to compete in Tri-series for deaf in Kolkata