Qatar 2022: Japan stun Spain but both go through, Germany knocked out at group stage again 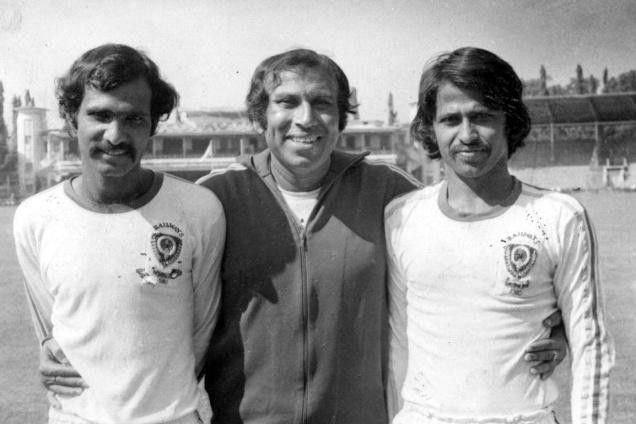 PK Banerjee (centre) was an institution in himself.

The Hyderabad man is still remembered for his exploits with the national team. Twice under him India won gold medal at the Asian Games. However, Rahim’s performance as a coach at the club level was no less amazing.

As the legendary coach of Hyderabad City Police, Rahim’s best was witnessed in Rovers Cup. His crack side won the Mumbai meet five years in a row between 1950 and 1954.

But the story doesn’t end here. In 1958, Mumbai’s top institutional side, Caltex, requested Rahim to train their team before Rovers Cup. He obliged. Caltex won the trophy. In 1961, a similar request came from EME Centre. Rahim Agreed. EME bagged the Rovers Cup.

No coach in India could ever display such incredible dominance. Except for PK Banerjee, who passed away early this month. There was a time in the 70s when everything PK touched turned to gold.

PK, it is often said, was fortunate to have a galaxy of star footballers on his side when he won innumerable trophies for East Bengal and Mohun Bagan in the 70s. It wasn’t exactly true always.

Heartfelt condolences on the passing of the great Indian footballer PK Banerjee!

Have fond memories of meeting him on a few occasions and the positivity he spread.

May his soul Rest In Peace!🙏🏼 pic.twitter.com/NqXO2A91wc

A few years later, authorities of a Shillong-based school requested PK to train their school team for a couple of weeks before they proceeded to play Subroto Cup in Delhi. PK by then had become a celebrity. He was at the prime of his coaching career, firmly established as the finest in India.

Yet, PK agreed. Perhaps because of his respect for the principal of the school. At the end of two weeks, the Shillong school returned home with the winners’ trophy. That, too, beating a team in the final who won the title several times. And were infamous for fielding over-age boys.

In the 70s, PK’s name had always been associated with stars in East Bengal and Mohun Bagan. Players like Sudhir Karmakar, Subhash Bhowmick, Gautam Sarkar, Mohammed Habib, Shyam Thapa etc. made him country’s most sought-after coach, and it was regularly said.

Not many recall the 1973-74 Santosh Trophy in Kochi when Kerala won their maiden title. Bengal were a glittering side, firm favourites to clinch the trophy third time in a row. All of PK’s wards from Mohun Bagan and East Bengal formed the core of the Bengal team.

The only person missing was PK himself. He was in the rival camp. He had to do his duty for his employers. So, he took a modest Indian Railways squad to Kochi.

In the double-leg semi-final, Railways were pitted against fancied Bengal. Once again PK displayed his class. He had key Bengal forward Habib completely bottled up. Railways beat Bengal to reach the final.

I would like to offer my heartfelt condolences to the family of Mr. PK Banerjee as well as to the entire Indian football fraternity.
He was a pioneer in every sense of the word, and his achievements will forever have a place in Indian footballing history. Rest in peace.

As a footballer, PK mostly played for the unglamorous Eastern Railway. It couldn’t stop him from reaching the top. He wasn’t different as a coach, too.

But then, PK’s magic was definitely on the wane in the 80s. His worst came in the 1986 Seoul Asian Games. India were in a strong group but three consecutive defeats against South Korea, China and Bahrain didn’t enhance his reputation as India’s best coach.

Eight goals were conceded in three matches, only one could be scored. There were too many controversies, too many compromises. PK watched helplessly. Finally, the manager’s report made things worse.

An irked sports ministry didn’t allow India to play the next two Asian Games in 1990 and 1994. The 1986 fiasco caused huge damage to a generation of footballers for the next 10 years.

Looking back at things, one feels (in hindsight though), it would have been better had PK quit coaching after 1982 Asian Games and switched over to the role of coaches’ instructor. It would have helped a large number of upcoming coaches.

But again, the All India Football Federation (AIFF) had no such infrastructure those days. And no vision, too. PK was a great player and a successful coach. Above all, he was a gifted speaker, had natural ability to convince people and a born teacher.

Sadly, the other side of PK Banerjee was never explored.