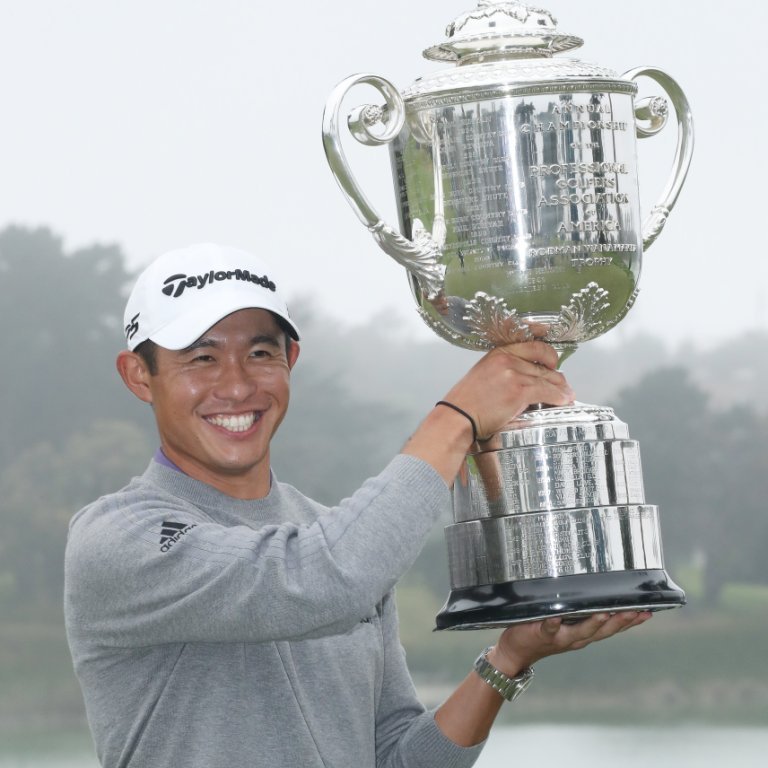 San Francisco: The best shot of his life, the shot that made Collin Morikawa a major champion, was never supposed to happen.

He knew the tee on the 16th at Harding Park would be moved forward at the PGA Championship. He said during practice rounds that wouldn’t tempt him to go for the green.

But this was Sunday afternoon, right after Morikawa had chipped in for birdie to break out of a seven-way tie, and at this moment was tied again with Paul Casey.

The shot will be remembered as one of the best in a major that hardly anyone witnessed, not with spectators banned during the COVID-19 era for majors.

Morikawa hit driver on the 294-yard hole that was perfect in flight and even better when it landed, hopping onto the green and rolling to 7 feet for an eagle that all but clinched victory on a mostly quiet, chilly afternoon at Harding Park.

In the first major without spectators, the 23-year-old Californian finished with a bang.

The chip-in for birdie, the tee shot for eagle, it added to a 6-under 64 and the best closing round by a PGA champion in 25 years, and a two-shot victory over Casey (66) and Dustin Johnson (68).

The only regret was the lack of a roar this shot deserved. He had no idea how good it was until he got closer to the green.

“This is one time I really wish there were crowds,” he said with a broad smile.

“I was just praying for a straight bounce … and then after it bounced, it kind of got behind a tree that we couldn’t see around the corner. So once it bounced, I was like ‘OK, I will take it anywhere.’

“I peeked around right and looked around the tree, and it looked really, really good.”

The COVID-19 pandemic that moved the PGA Championship from May to August was allowed to be played only if spectators were not allowed. But there was one person who won’t forget what he saw.

Casey, with his first good shot at winning a major, birdied the 16th to tie Morikawa for the lead. Standing on the tee at the par-3 17th, he looked back and saw the ball roll toward the cup.

“What a shot,” was all Casey could say.

“Nothing you can do but tip you cap to that. Collin had taken on that challenge and pulled it off. That’s what champions do.”

Golf’s latest major champion was still in the vicinity of Harding Park just over a year ago, finishing up his degree at California and his All-American career, part of a new cast of young stars in a sport filled with them.

He only played Harding Park about a dozen times while in college, but never set up with rough like this or with the tees all the way back.

Now he has three PGA Tour victories and is No. 5 in the world, taking his place among the young stars by beating a cast of world-class players on the public course in San Francisco.

“Those are moments I’m always going to remember,” said Morikawa, who became the sixth player to capture this major before turning 24.

For Johnson, it was another major that got away. He had a one-shot lead and didn’t do too much wrong on the day except for not keeping it in the fairway for better chances of birdie. He drove into the hazard on the 16th and chipped in for birdie when it was too late, and a birdie on the 18th gave him a tie for second.

It was his fifth runner-up finish in a major his only title is the 2016 U.S. Open and his second straight runner-up in the PGA Championship.

Brooks Koepka proved to be all talk. He looked at the crowded leaderboard on Saturday night and didn’t see anyone with his experience of four major championships, even dishing on Johnson because he has “only won one.”

Koepka didn’t make a birdie until the 12th hole. He went from two shots behind to a 74, tying for 29th.

“It’s my first bad round in a major in a while,” said Koepka, who said he spent the back nine mostly trying to cheer on Casey and his bid to win a first major at age 43.

Morikawa finished at 13-under 267, and left so many others wondering how close they came.

Matthew Wolff, who grew up with Morikawa in Southern California and turned pro last summer with him, shot a 65 and joined Jason Day, Bryson DeChambeau, Tony Finau and PGA Tour rookie Scottie Scheffler at 10-under 270.

Cameron Champ, among eight players who had a share of the lead at some point, lost momentum with a double bogey at the turn. DeChambeau dropped two shots at the turn and never caught up until it was too late.

Morikawa, in only his 28th start as a pro and his second major, played bogey-free. His only mistake was at the end, when it was time to hoist the Wanamaker Trophy, the heaviest of the four major trophies. The lid came off and tumbled to the grass as Morikawa’s eyes bulged.

If that was his only mistake, consider it a successful day. A major success.