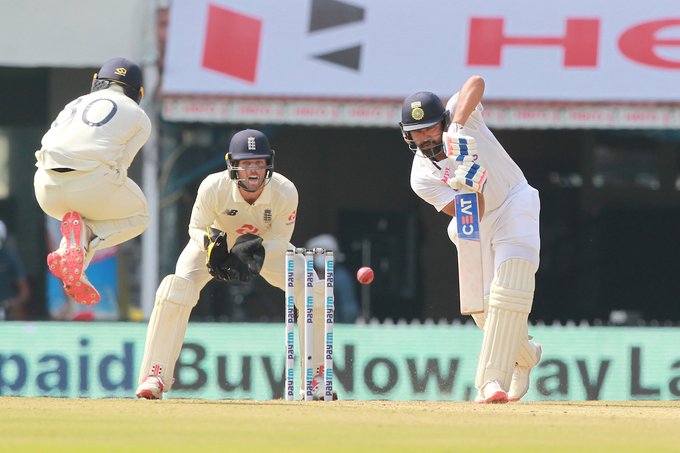 Ahmedabad: India opener Rohit Sharma has said that while he has managed to tweak his game a bit in the just-concluded series to suit Test cricket, his approach for T20 cricket will remain the same old one where he will look to give the team a good start especially in the first six overs.

Sharma will be playing his first T20 International after over a year and did not tour Australia for the T20s due to injury. India won that series 2-1.

Speaking ahead of the T20 International series that begins at the Narendra Modi Stadium in Motera from Friday, the right-handed batsman talked of the challenges he faced during batting in the last Test when he had switch to watchfulness.

“When you have to go against your own nature and have to do things that you are not used to, then it is a small win. If you keep doing that again and again then you will gain in confidence. The way I batted, especially in the last Test match, when I made only 49 runs but played 150 deliveries, I felt great. I had to play against my nature,” said Rohit.

“I felt like I should chase the deliveries that they were bowling outside off-stump, but I kept my nature aside and batted. I didn’t play bad shots. To play with discipline was key. I got out, but was happy. My challenge in Tests nowadays is how many balls I play not how many runs I make. I have to play 100, 150 or 200 balls. That is a small battle within itself.”

Sharma admitted he is not sure who he will open the batting with – K.L. Rahul or Shikhar Dhawan. Despite not knowing his opening partner, he says his role remains unchanged.

“My role doesn’t change. I have to bat in a similar fashion, make sure I give the team a start and bat as long as possible. Nothing changes for me. I just need to make sure that if you are batting first, try and give the team a good start in the first six overs, set a target,” he added.

“Of course when we chase, the approach remains the same but the mindset changes because you have a score in front of you, you have to calculate and bring that into your game. For me not a lot changes and I have to just assess the situation.”

The 33-year-old said that irrespective of the team composition, his approach will remain the same and doesn’t change.

“My approach remains same, to look for scoring opportunities, have intent. Important for me to understand that situation and play according to that whether we bat first or bowl first. Situation of the game demands the approach of your batting.”

He added that he has played enough T20 Internationals and for many years.

“I have played more than 100 T20Is. Because I have done it for many years. Situation changes every now and then, based on that I have to change.”