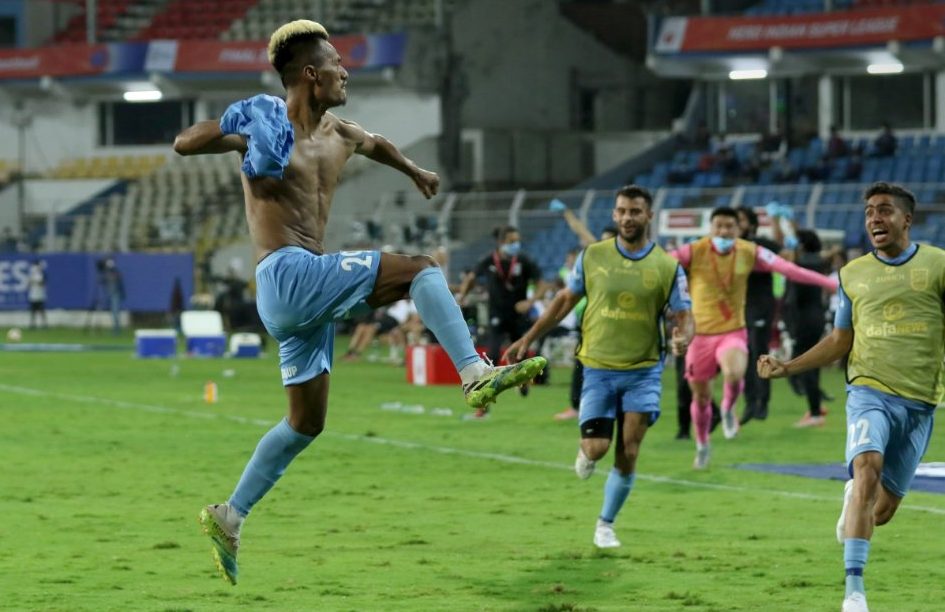 Mumbai also completed the ‘Double’ over Bagan, winning the League Winners Shield and the ISL trophy, completing  a hat-trick of wins over their nearest rivals in the 2020-21 season.

Gegenpressing or counter pressing was the overriding theme, leading to two of the three goals scored in the season-finale.

Both teams focussed on seizing control of the ball and transitioning swiftly from defence to attack. Chances created were shared equally between both the teams.

Bipin’s theatrical dive in the 11th minute had murmurs of a penalty while Xavi Hernandez’s left-footed free-kick and off-target volley raised the anxious levels of the Mumbai dugout.

Persistent chasing of the ball in Mumbai’s defensive zone brought ATKMB rich rewards early in the match. Krishna and Williams moved like hungry wolves and hounded Mumbai defenders, lulling them into mistakes.

Trying to stay true to their building-from-the-back philosophy contributed to their downfall. Mourtada Fall and Ahmed Jahouh’s momentary indecisiveness and inability to release quickly allowed Krishna to snatch the ball and Williams to blast his way through Amrinder’s hands.

But Bagan undid all their good work with yet another silly defensive mistake, normally atypical but off-late a regular occurrence.

A back-pedaling Tiri’s back-header off Jahouh long ball wrong-footed Arindam Bhattacharya, making it the Spanish defender’s second own goal in a crucial match of the tournament.

The unexpected ‘assist’ lifted Mumbai and it needed a strong reaction-save from Bhattacharya to deny Boumous from putting his team ahead a minute later.

Bagan could have got their bearings back again had Krishna not bulged the side netting with a menacing run after hoodwinking Fall and Amey Ranawade on the corner flag.

A change of ends didn’t alter Mumbai’s willingness to force the issue. Their wish would have been granted had Boumous put away a very presentable opportunity just before the hour mark.

The Frenchman ran at the Bagan defence and then got at the end of a rebound but uncharacteristically put the ball over the bar with the entire goal at his mercy.

That miss had the potential to alter the flow of action and nearly did when Mohammed Rakip’s faulty clearance landed in their net. But the substitute, pressed into action after a dangerous head injury to Ranwade, escaped punishment as the goal was disallowed for Krishna being in an offside position, much to the anger of Bagan.

Luck seemed to be on their side again in the 73rd minute when Hernandez’s left footer stung Amrinder’s right hand and went out after hitting the bar.

The ball ebbed and flowed at both ends as the teams prepared to take fresh guard in extra time, until substitute Bartholomew Ogbeche’s dash in pursuit of another long ball forced Arindam to fluff his line. He failed miserably to clear the ball, allowing Ogbeche to lay it off for Bipin to guide it into the net.

Masters at nicking it late, Bagan were trumped at their own game by Mumbai, who scored so late that the Mariners had no time to respond.