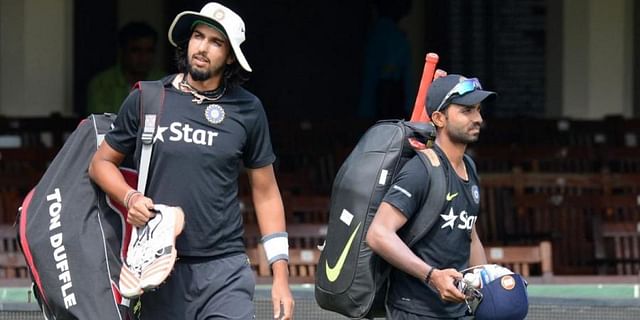 Mumbai: Ajinkya Rahane and Ishant Sharma’s position in the Indian Test team had become untenable due to prolonged run of poor form and more than anyone else, the two cricketers knew about it.

However on Friday, the BCCI and the team management found an “exit route” which was honourable for both the distinguished senior cricketers as everyone associated wanted to be subtle while taking a tough decision, at least for this Test.

Before the opening day of the second Test, the BCCI officially announced that Rahane, Ishant and, more importantly, Ravindra Jadeja are out of the match due to various injuries.

In case of Rahane, he sustained what was described as a “minor left hamstring strain” while fielding on the final day of the first Test match in Kanpur. The Kanpur Test ended on November 29 and on the final day, Rahane was on the field for the entire duration of 90 overs, and at times sprinted towards the boundary.

Hamstring niggles are believed to be the most painful as it tends to hamper movement and batting becomes an issue with restricted feet movement. On Thursday, the Indian team were training indoors at the Bandra Kurla Complex facility and the BCCI’s official twitter handle posted a picture of Rahane batting with a wide grin.

On Friday, before the game, Rahane had a nice little jog around Wankhede (with the hamstring niggle) and then gave catching practice to the slip cordon where he would plonk his left foot and get power behind his throw for the catches.

When PTI got in touch with a state team physio, he said: “Hamstring tear is something that depends on the Grade and if it is grade 1, you will be out for two weeks minimum and grade two would be between four to six weeks.

But in case of niggle, you need to rest and not exert yourself. “But with niggle, it’s best advised not to bat as it can aggravate and become a tear,” he said.

While nobody is saying it openly but both for the team management and the BCCI, it was a catch-22 situation where they had no option but to drop an out of form man but also at the same time make it look more dignified.

How can one drop a player on the basis of form after he was captaining in the previous game? Obviously, the team management had to find an escape route which doesn’t make it awkward for a veteran of 80 Test matches.

This also gives them a chance to select Rahane for the South Africa tour despite failure in 12 successive matches. In case of Ishant, everyone associated with Indian cricket knows that the “old workhorse” is past his prime.

He had dislocated the little finger of his left-hand during the final day of the first Test in Kanpur. Normally, a CT scan or MRI report comes instantly and for the last 72 hours, the Indian team is in Mumbai.

Even when bowling coach Paras Mhambrey spoke about Ishant’s bowling lacking a bit of rhythm due to lack of game time, there was no information on his dislocation which is believed to have been clear by then.

In this back-drop, it is to be seen whether Rahane is able to retain his vice-captaincy in South Africa or it goes to another senior player Rohit Sharma.

For Ishant, even if he is able to regain his place in the side, whether he would make the playing XI in the presence of Jasprit Bumrah, Mohammed Shami, Umesh Yadav, Mohammed Siraj, Prasidh Krishna and Avesh Khan is a big question.

The answer will be out soon but Rahane and Ishant’s fans would hope that they haven’t seen the last of two tireless servants of Indian cricket.