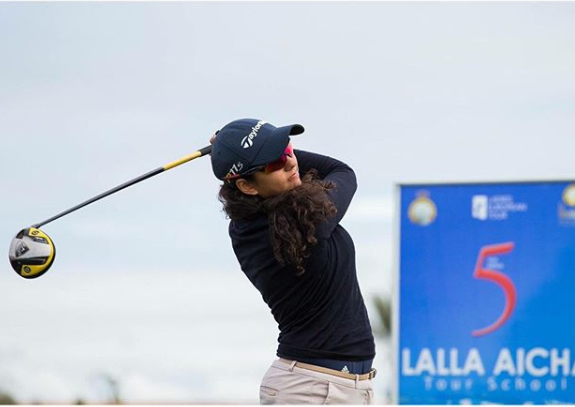 New Delhi: Gaurika Bishnoi’s reaction was worth watching when asked to comment on golf’s inclusion in the Olympics. The Indian professional golfer excitedly said, “For me, my dream event has been the Olympics. It is fantastic that now golf is a part of the Olympics.”

But she is also a bit disappointed as she has to wait till 2024 to represent India at the Games. “Unfortunately, I have to wait for the 2024 Olympics. Since I just graduated, so three years, it’s been juggling between studies and sports, it gets a little tough to do two things at a time. But I’m pretty optimistic about my chances in 2024,” Gaurika told Sports Lounge.

Golf was an Olympics sport in 1900 and 1904 and returned to the fold at the 2016 Rio Olympics. She said her source of motivation is Aditi Ashok, a fellow professional Indian golfer who also took part at the Rio Games. In 2017, Aditi became India’s first golfer in the Ladies Professional Golf Association (LPGA).

Gaurika’s target is to emulate Aditi.  “I’m really inspired by Aditi. We have played and travelled together. I have seen how much she has improved and dedicated herself to the game. It is always better to have very relatable idols and I draw motivation from her,” she said.

The 22-year-old Gaurika is playing golf for almost the last 10 years. She was the top ranked profesional women’s golfer of the country in 2017-18 and also picked up her maiden title of the season in Hero WPG Tour.

She is satisfied with her performance till now. “I am happy to be the number one player in the country. But as a sports person, we always feel that we can get better and better, it is a never ending process.”

To improve, Gaurika takes feedback about her game regularly. According to her, she has definitely improved herself. “I would want to play on the European Tour with the full card. So I think that’s my next target now.”

The sports ministry granted has granted a 90-day lifeline to the Indian Golf Union (IGU) to run the sport after de-recognising it for failure to implement the National Sports Code. The Indian Olympic Association has formed a governance panel to run the sport and appointed Women’s Golf Association of India’s president (WGAI) Kavita Singh to chair its meetings.

When Gaurika was asked about her views on the issue she said, “It is very unfortunate what happened with IGU. “But Kavita ma’m genuinely loves the sport. So I am very sure that Kavita ma’m will do whatever best can be done for the golfers in India.”