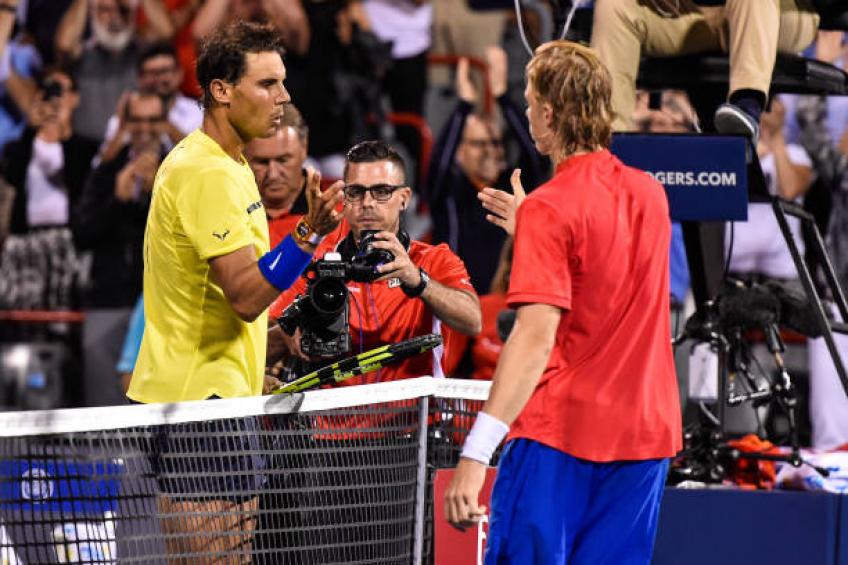 Madrid: Rafael Nadal, the year-end World No. 1, finished his season on a high by leading Spain to its sixth Davis Cup title. Nadal defeated Denis Shapovalov 6-3, 7-6(7) to clinch Spain’s 2-0 win against Canada.

“It has been an amazing week,” Nadal said on court after his win. “I could not be happier, honestly. It has been an unforgettable moment here in this amazing stadium. The crowd was just a joke, we can’t thank all of them enough. Our team spirit prevailed. We fought hard.”

Nadal, who is now a four-time Davis Cup titlist, won all eight of his matches this week in Madrid, including five singles victories in which he did not drop a set. The 33-year-old has now won 29 consecutive Davis Cup singles matches, improving his singles record in the event to 29-1.

Nadal took a 2-1 lead in his FedEx ATP Head2Head series with Shapovalov, who defeated him two years ago in Montreal. But the Canadian brought his best, pushing Nadal until the end.

The 20-year-old showed no fear of the moment, trading blows with the Spaniard from the baseline. Nadal earned two championship points for Spain at 6/4 in the tie-break, but Shapovalov guessed correctly as the Spaniard crushed a short ball from right in front of the net, allowing the Canadian to lace a laser-like forehand pass down the line. On the next point, Shapovalov hit a winner off of a forehand approach shot to even the score.

The Stockholm champion earned a set point of his own that would have sent the rubber to a decider, but Nadal saved it with a forehand winner, and the Spaniard converted his third match point when Shapovalov hit a forehand down the line into the net. Nadal immediately fell to the court in celebration as his teammates swarmed him.

Earlier in the day, World No. 9 Roberto Bautista Agut put Nadal in position to clinch the trophy with a 7-6(3), 6-3 win against Felix Auger-Aliassime, who had not played a match during the event.

The win had extra meaning for Bautista Agut, whose father passed away earlier in the week.

“It was a very special feeling on the court today,” Bautista Agut said according to DavisCup.com. “I just tried my best on the court and I’m very happy I could win today.”

Spain had most recently competed in the final of the Davis Cup in 2012, when the country fell to the Czech Republic. Canada was seeking its first Davis Cup trophy.