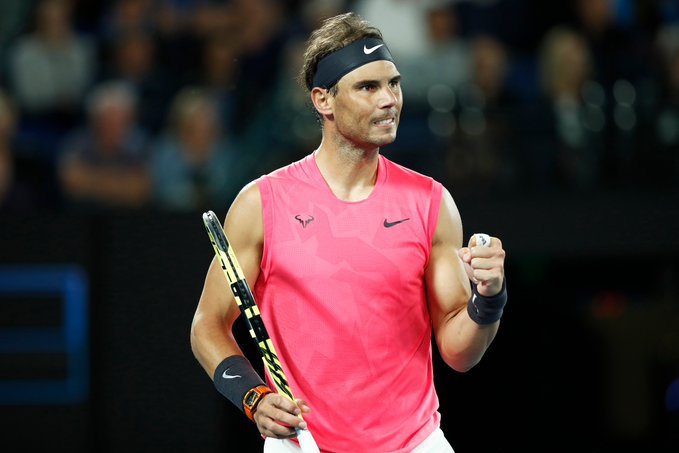 Melbourne: World no. 1 Rafael Nadal scored the 63rd victory at the Australian Open, ousting Federico Delbonis 6-3, 7-6, 6-1 after challenging two and a half hours.

The Argentine gave his best to stay on the level terms with a former champion but it wasn’t enough at least for a set in the end, making too many errors and missing a chance to put more pressure on Rafa on the return.

Showman Nick Kyrgios blasted Frenchman Gilles Simon off court, with his raw talent shining through in front of an adoring home crowd.

The 24-year-old had the measure of the veteran early on then lost concentration and became agitated before refocusing to win 6-2, 6-4, 4-6, 7-5 on his favoured Melbourne Arena.

It set up a third-round clash with either Russian 16th seed Karen Khachanov or Sweden’s Mikael Ymer, with the winner of that match on course to meet world number one Rafael Nadal in round four.

Dominic Thiem continued his reputation as a master of deciding sets at the Australian Open on Thursday.

Medvedev was impressive in a 7-5 6-1 6-3 dismissal of Spanish qualifier Pedro Martinez, a nose-bleed breaking his momentum more than his No. 168 opponent, while Thiem had an almighty scare against flamboyant Aussie wildcard Alex Bolt, prevailing 6-2 5-7 6-7(5) 6-1 6-2 in his first win at Melbourne Arena.

In the women’s section, World No.3 Simona Halep progressed through the second round with a 6-2, 6-4 victory over qualifier Harriet Dart.