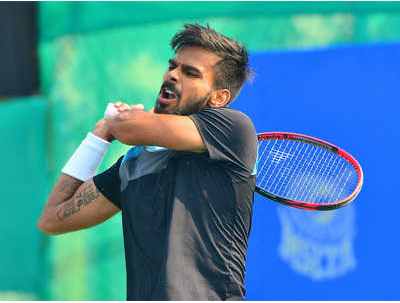 Monaco: India’s Sumit Nagal will be up against a tough player when he takes on Italy’s Stefano Travaglia in the Monte Carlo Rolex Masters Qualifiers (Round 1) match on Saturday.

The tournament, headlined by the likes of Spain’s Rafael Nadal — who will open his 2021 clay-court campaign in Monte Carlo — and Serbia’s Novak Djokovic (winner in 2013 & 2015), will also see the likes of Italy’s Fabio Fognini, Russian Daniil Medvedev, Greece’s Stefanos Tsitsipas and Germany’s Alexander Zverev competing for the prized trophy in the ATP Masters 1000 tournament.

For the Haryana-born Nagal, the tournament is an opportunity to show that the first-round loss in the ATP 250 Sardegna Open in Cagliari, Italy earlier this week was an aberration.

The 136th-ranked Nagal had lost to Slovakian qualifier Jozef Kovalik 6-3, 1-6, 3-6 after entering the main draw full of confidence after winning two qualifying rounds.

The match against Travaglia will not be a cakewalk as the 29-year-old Italian had reached the French Open third round last year and was once ranked No. 70 in the ATP.