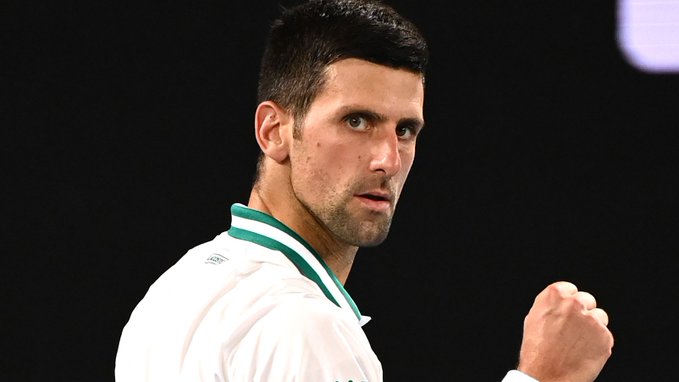 Melbourne: Serbian world no.1 Novak Djokovic on Thursday got closer to winning his ninth and third consecutive Australian Open title by crushing Russian qualifier Aslan Karatsev 6-3, 6-4, 6-2 in the semi-finals at the Rod Laver Arena.

Djokovic was utterly dominant throughout the match and ended Karatsev’s dream run. The Russian is the first man to reach the semi-finals on his debut in a Grand Slam.

Djokovic, meanwhile, has won the title every time he has reached the final at the Australian Open. The 33-year-old 17-time Grand Slam champion has struggled with an abdominal injury during the tournament but showed no signs of the problem against Karatsev.

“This is the best I have felt in the entire tournament. It felt great, I could swing through the ball and no pain,” he said after the match.

“It was my best match so far and came at the right time. I’m thrilled.”

Muchova saved as many as five match points off Brady’s serve in the final game. Brady raced to a 30-0 lead and then got to her first match point at 40-15. However, Muchova then won the next three points consecutively before Brady held to make it deuce for the first time in the game.

The pair then exchanged advantages over the next nine points before Muchova hit a return long, giving Brady the victory.

“I can’t feel my legs right now. They’re shaking, my heart is racing. After the first set, I thought to myself, ‘let’s focus Jenny.’ I actually felt strange when I came out, I was excited but also a bit flat-footed. I don’t think I had that much intensity in the beginning of the match, but that improved over time,” said Brady on court after the match.

“I think it will be a really tough match against Naomi Osaka. She’s won a few Grand Slams, and we had a really great battle at the US Open, in the semi-final. I’m just going to hang with my team now, spend some quality time, do some recovery work and have a good gym session. I’m going to be a bit nervous tomorrow, but also very excited,” she added.

World No.3 Osaka will be playing in her second Australian Open final after winning the title in 2019. In the one hour and 15 minute-match, Osaka rebounded from a poor start to beat ‘her idol’ Serena Williams in straight sets 6-3, 6-4 to book her place in the Australian Open final.

This will be the 23-year-old Japanese’s second consecutive Grand Slam final and fourth overall.

After the match, Osaka accepted she was “nervous and scared in the beginning”.

“Then I sort of eased my way into it. For me, I think the biggest thing is just having fun and it’s the first day having the crowd in a while … it’s always an honour to play her. I just didn’t want to go out like really bad, so I just wanted to try my best.”

She added: “I don’t know if there’s any little kids out here today, but I was a little kid watching her play and just to be on the court playing against her for me is a dream.

“I think the biggest thing that I’ve learned over the years is just like, you know, you’re competitive, you’re playing against another competitor. That itself is the funnest part because tennis is a game.”

Williams’s bid for a record-equalling 24th Grand Slam title will now have to wait until the French Open which is scheduled to start on May 24.

Osaka faces either Czech Republic’s Karolina Muchova or USA’s Jennifer Brady, both of whom are yet to appear in the final of a Grand Slam. She has extended her winning streak to 20 matches.

Williams raced a 2-0 lead in the first set before Osaka took control. Osaka then broke Williams at the start of the second set before running off to claim her third win against the 39-year-old American in five matches.