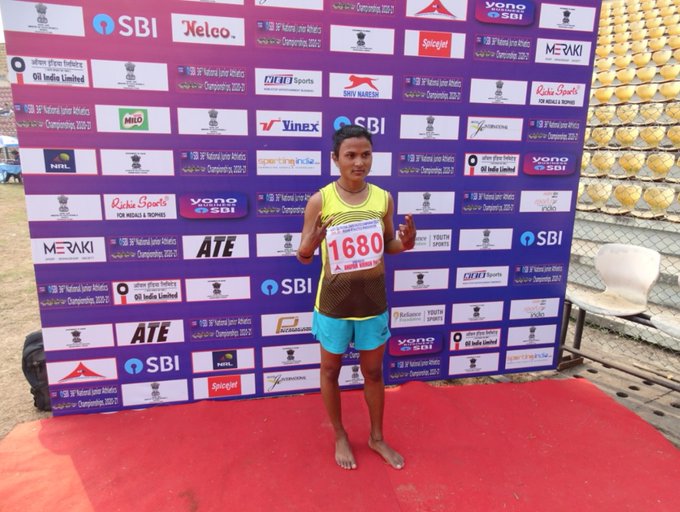 Guwahati: Uttarakhand’s 16-year-old Reshma Patel broke a national record for the second time in a fortnight when she won the girls under-18 5000m event in the 36th National Junior Athletics Championship at the Indira Gandhi Athletic Stadium here today.

Reshma claimed the National u-20 Record when she made her debut in the 10,000m Race Walk in the Federation Cup Junior U20 Athletics Championships in Bhopal on January 26.

The Dehradun girl had competition from Rupali (Uttar Pradesh) and Deepika Sharma (Rajasthan) but did well to pull away from her rivals to post a comfortable win.

Late in the evening, the under-18 quartermilers produced better times than the under-20 runners in both the men and women’s finals. Tamil Nadu’s S Barath and Haryana’s Kapil both clocked sub-48 times in the boys under-18 final while Priya Habbathanahally Mohan (Karnataka) and Summy (Haryana) dipped in under 56 seconds in the girls under-18 final.

Delhi sprinters Ritik Malik and Taranjeet Kaur won the under-20 men and women 100m races while the title of the fastest Under-18 athletes were captured by Anshul (Delhi) and Avantika Santosh Narale (Maharashtra), who beat her familiar rival Jeevanji Deepthi (Telangana). Dheeraj Kumar Pahadi (Jharkhand) won the boys under-16 100m crown

Saniya Mahendra Sawant (Maharashtra) won the close contest in the girls under-16 category, edging out her State-mate Siya Abhijit Sawant and Soumita Paul (West Bengal) by one-hundredth of a second. The photo had to be consulted to decide the second place and Maharashtra could claim a 1-2.

It was clear that the two were dishing out a treat to those following the event. Rohit Yadav’s throw sailed 6cm farther than that of Yashvir Singh, who is fresh off a victory in the Federation Cup Junior U20 Championship in Bhopal.