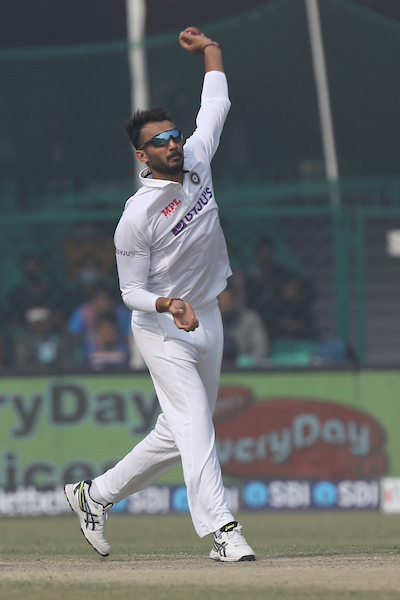 Kanpur: Thirty two wickets in only seven Tests innings is no mean feat and Axar Patel says the secret of his success lies in enjoying his craft and believing that he can’t be ‘pigeon-holed’ as a T20 specialist.

The left-arm spinner took 5 wickets for 62 runs to bring India back in the first Test against New Zealand.

It was his fifth fifer in just seven completed Test innings, an incredible feat in its own way even if he bowled in spin-friendly conditions.

“Whenever I have played first-class or India A, I have done well. I have never seen myself as a white ball specialist,” Patel made it clear that he doesn’t like being bracketed.

For the left-arm orthodox from Gujarat, it’s all in the mind.

“It’s all in mind-set as to what you perceive yourself as – a white ball specialist or red ball specialist. I always had the belief that whenever I get a chance I will do well.

“Obviously, I give credit to team members for having faith in me and I have been able to stand up to their expectations.”

But does he feel extra pressure that two world class spinners in Ravichandran Ashwin and Ravindra Jadeja are also in the same eleven? “Whenever I go to the ground, I try and enjoy and not think about whether Ashwin bhai and Jaddu are there,” he made his thought-process clear.

“When I have ball in my hand, I just try and see to it that I am enjoying my bowling, trying to read the wicket and understand what’s happening, how it’s behaving and plan accordingly,” he elaborated.

He is not at all bothered whether he has a lead role or a supporting one.

“I don’t think about whether my role is a lead one or whether there are senior bowlers around me, I only think about my bowling and what is required to be done in that particular spell,” he added.

Axar made subtle changes while bowling on Saturday compared to his first spell on the second day and the key was to play with varied angles, mixing the pace of his deliveries.

“I used the crease much more today and I didn’t use the crease a lot in the 10 overs that I bowled yesterday.

“I was using the crease by going wide and coming near the stumps, creating various angles, and that helped me get a lot of purchase,” he said when asked about what kind of changes he brought about on Saturday.

Patel assessed that the pitch isn’t as difficult as it may seem as only the odd ball is turning or keeping low but at the same time reminded that patience will be the key.

“Our batters were present at the ground and they also have a fair idea.

We were discussing that cracks haven’t opened much and only the odd ball is doing a bit, if you play the ball on its merit, there won’t be much trouble,” he said.

“There isn’t any uneven bounce as such.

An odd ball is either turning or keeping low.

If they start bowling a disciplined line and keep patience then only our batters can face some trouble.

I will advise our batters to keep patience and put the bad balls away,” he said.

Patel is happy that stand-in captain Ajinkya Rahane and head coach Rahul Dravid helped in keeping a calm dressing room when the team did not get any wicket for 67 overs.

“Obviously, if you don’t get wicket for 67 overs, it’s tough but dressing room was calm as Ajju bhai and Rahul sir kept a calm environment.

They said we have to keep patience because if we get one, we will get a few more and then we can make inroads,” he said.

“We got the reward for our persistence in the first and second session,” he signed off.