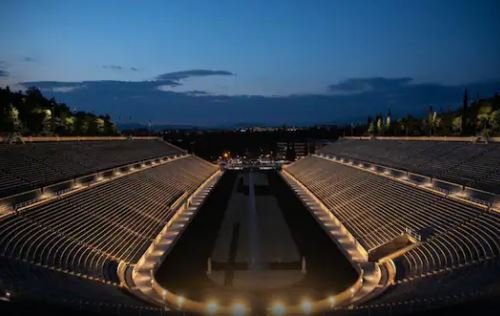 Athens: A new lighting system installed at Athens’ Panathenaic stadium has been unveiled. The marble main venue of the first modern Olympic Games of 1896 is now illuminated with thousands of LED bulbs to reduce light pollution and save energy.

Bach switched on the lights with the words of Pierre de Coubertin, the founder of IOC and father of the modern Olympics, “Olympism calls for air and light for all,” according to an e-mailed press release by the Hellenic Olympic Committee (HOC).

Welcoming him at the Presidential mansion on Tuesday, Sakellaropoulou congratulated him for his recent reelection at IOC’s helm and wished the best success for the upcoming Tokyo Olympics, according to an e-mailed press statement by her office.

On his part, Bach, who also held a meeting with Greek Prime minister Kyriakos Mitsotakis, reiterated confidence that this summer’s Games will be held safely for all participants.