Kolkata: What’s a top tier football competition without a country’s two most storied clubs? It was akin to food without salt. And how long can such a league run?

Well, not for long, as in only its second year since AFC’s stamp of approval as a full-fledged top-tier tournament, enter Mohun Bagan (131 years old only) and East Bengal (100 not out) in the Indian Super League (ISL).

But make no mistake. They didn’t just waltz its way into the league solely on the basis of their ‘history, legacy and tradition’. Even Bagan becoming I-League champions didn’t cut much ice.

They had to adhere to the ISL’s non-negotiable financial regulations, adapting to a corporate company oriented style of functioning, where financial backers dictate terms.

Hence, Mohun Bagan had to become ATK Mohun Bagan and East Bengal had to be SC East Bengal, just to be financially ‘eligible’ to participate in the ISL. From age-old community institutions, these clubs have now become corporate entities, owned by prominent businessmen.

On the face of it, it’s a win-win situation for both parties. ISL, for the first time since its inception in 2014, can now boast of two true fan-based clubs. Perhaps a tad belatedly, flaunt one of world football’s most storied rivalries.

For Indian football’s ‘Big Two’ are not some Johnny-come-lately franchise who can disband or move base at the drop of a hat.

It also allows Bagan and EB to participate and win the country’s topmost competition, an obligation for them, irrespective of its nomenclature.

Their incorporation helps the ISL project a wholesome, no nonsense look. But would it be the panacea the closed league craves?

For all those fat pay cheques, high-profile footballers, Bollywood glamour, corporate mode of functioning, one could argue that it hasn’t really aided the national team’s fortune.

Neither has the high-stakes, relegation-exempt league offered a successful business model where corporate-backed franchises have ateast broken even or made profits on their annual multi-crore investment.

That the ISL’s defending champions chose to relinquish their club affiliation and become a mere brand name before Mohun Bagan – though only after gaining majority control in administration – is not an ideal advertisement for the league.

It was the third instance (in six years) that one of the league’s original eight franchises have shut shop. Seven of them have already changed their ownership structure at least once.

Cash-strapped Bagan and East Bengal had to swallow their pride and shape up to the economic demands of the league, relinquishing control over administration. Shortsighted and reluctant officials of these Maidan clubs have nobody but themselves to blame for their condition.

Not until now was the ISL wholeheartedly accepted in Kolkata, Indian football’s de facto capital, as a serious national league. 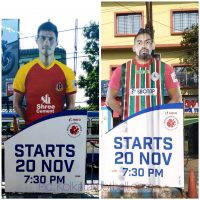 Placards involving ATK Mohun Bagan and SC East Bengal players have been placed all over Kolkata to drum up publicity for the ISL.

City-based ATK FC’s three triumphs in six years weren’t enough to form a dedicated fan following, compelling them to accept the characteristic green and maroon of Bagan as ATK Mohun Bagan’s primary colours along with the distinctive ‘sailing boat’ as the entity’s logo.

With restructured Bagan and East Bengal in their ranks now, ISL could expect chants of ‘masala league’ to die down.

AIFF’s marketing partners, who organise the ISL, could now hope for spontaneous public interest rather than orchestrated social media chatter they resorted to till now to engage its target audience.

They got a taste of real football fanaticism after airing a disastrous washing machine promotional video. Suggesting ATK Mohun Bagan as a continuation of ATK rather than Bagan’s new avatar through the “three stars” and “Champions 2019-20” insignia on their practice kit prompted a sustained online backlash from Bagan fans.

Despite this, they could still afford a wry smile as it is what they wanted all along – Mohun Bagan and East Bengal in ISL but on their terms.

Pity for the ISL that no fans would get a first-hand experience of it’s first ‘Kolkata Derby’ on November 27 because of the COVID-19 induced bio bubble in which matches would be played from Nov 20. TV viewership would skyrocket, a delightful news for ISL’s broadcasters.

Now that they have finally land the two big fish, it would be interesting to see how they handle all on-field and off-field baggages that inevitably come along with these two traditional Kolkata powerhouses.