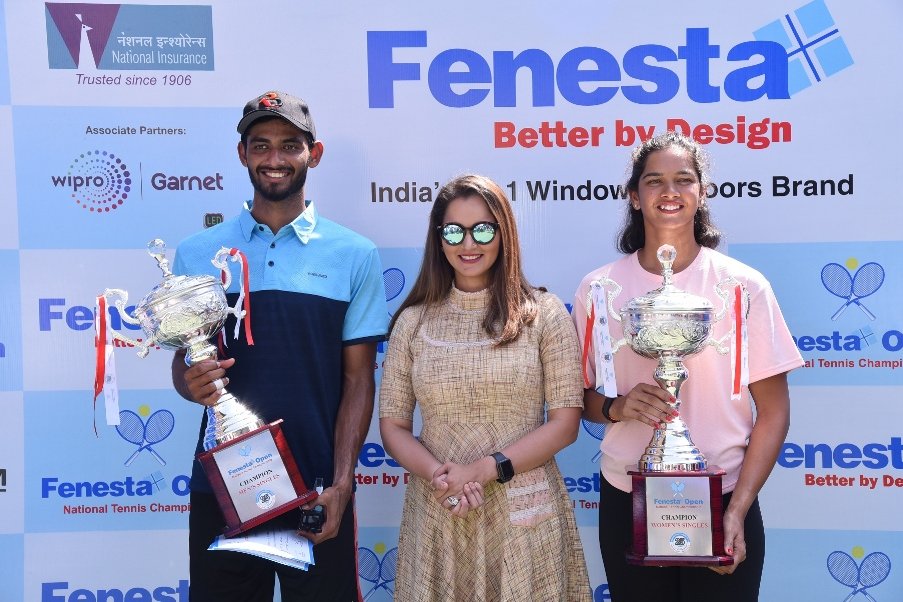 New Delhi: Nikki K Poonacha and Sowjanya Bavisetti crowned themselves in glory as they emerged champions in the men’s and women’s sections respectively in the Fenesta Open National Tennis Championship on Saturday.

Watched by tennis lovers and chief guest Sania Mirza, Nikki, who trains at the Rohan Bopanna Tennis Academy in Bengaluru played smart tennis with great control to outslug Aryan Goveas 6-2, 7-6 (7/4) in the final.

Both the players knew each other’s game well. For his part, Nikki, who has a rounded game, was eager to capitalise on the big chance which came his way. The key was not to succumb under stage pressure and play his natural game. He did that with flair and finesse and even won a round of cheer from his Guru Rohan Bopanna on Twitter.

Rising star Sowjanya grabbed the big chance which came her way today. Playing against four-time Fenesta Open winner and seasoned pro Ankita Bhambri, Sowjanya was not bogged down by her opponent’s reputation.

She waited for her chance to get the break in each set and pressed the cruise control button for her maiden National title win.

In the Boys Under-18 finals, Madhwin Kamath made it a grand double. Having won the doubles title earlier this week, Madhwin turned on the heat on court on Saturday against Udit Gogoi for a 6-2, 7-6 (7/1) win. In the second set, Madhwin, who trains at the Waske Tennis University in Gujarat, had to try more than his routine shots. Sure enough, he was able to wear out his opponent in the tie-breaker.

In the Girls’ Under-18 final, Rashmika Bhamidipaty was too good for Sandgheepti Singh Rao and won 6-0, 6-4. The first set was a breeze as Rashmika did not drop a game.

In the second set, Rashmika met with some resistance but it was not serious enough for big damage. The 18-year-old closed out the match without trouble.