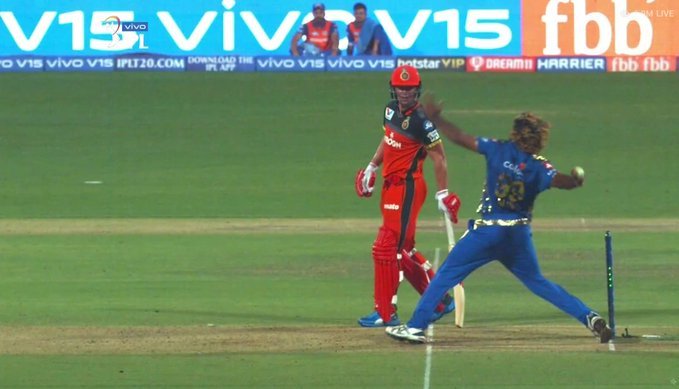 Umpires have copped a lot of criticism in the ongoing IPL. Photos: Twitter

Umpiring, on most occasions, is a thankless job. Rarely do they get credit for their judgement, particularly in this age of technology, and are often pilloried for their mistakes.

S. Ravi’s case is a classic example. Part of the International Cricket Council’s (ICC) umpire’s panel, the Indian is highly respected throughout the cricketing world.

He has in the past successfully dodged controversies and possess a penchant for judicious interpretation of laws, a rarity in these days of TV umpiring and constant monitoring.

He withstood tremendous pressure while officiating in the Ashes. Where a weaker umpire would have faltered, not once did he err.

He is in the eye of a storm for missing Malinga’s no ball, which arguably altered the outcome of the RCB vs Mumbai Indians match. Had he called it an illegal delivery, AB DeVilliers would have been on strike for a free hit, and the result could have been different.

RCB’s loss irked their skipper Virat Kohli, who is himself under tremendous pressure for his team’s faltering start to the tournament.

MI skipper Rohit Sharma added more lung power to Kohli’s stinging criticism of Ravi, and cricket lovers had a field day believing they had an axe to grind against him.

Rohit and Kohli’s conduct definitely warranted punitive action from the BCCI, in whatever quantum it might be. But what was baffling was that they were not even warned.

This #VIVOIPL season never seems to be short of drama – and we're only in the first week! 😲

Lasith Malinga's no-ball could've been result-changing if called by the umpires. Should a check for a no-ball be made mandatory for situations like this? Tell us what you think! #RCBvMI pic.twitter.com/5Lt5G6OZ59

One doesn’t break into a sweat to criticise umpires, but one should keep in mind the circumstances they work under. Ravi’s plight reminded me of my formative years as a journalist way back in 1968 when I too was critical of umpires.

There were no television or replays in those days and we criticised umpires whenever they got it wrong.

But my perspective changed radically once I umpired club matches after being persuaded to clear the Mumbai Cricketers Association exam by the late umpire A.M. Mamsa in 1978.

Mamsa believed that the majority of journalists criticise umpires even though their view from the press box is not in line with the stumps.

Criticism on top of a mistake can ruin an umpires’ career, which I witnessed within a week of clearing the exam, while officiating in my first club match.

My colleague was a senior umpire who had officiated in the Ranji Trophy. Like Ravi, he too missed a big no ball in the last over.

Batsmen are dismissed when they commit mistakes, bowlers get punished by the batsmen upon bowling bad balls. But if an umpire errs, he loses his job. 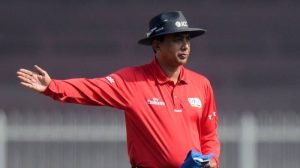 Umpire S. Ravi is in the eye of the storm for failing to spot a no ball.

Condemnation can be devastating for an umpire’s career, it can shatter his confidence forever. Something similar happened with my senior colleague, who never officiated in another match after the incident, even refusing to take his match fees for the mistake.

The media didn’t take into account Ravi’s positive reputation while vilifying him, which I felt was too harsh.

Umpires like Ravi are not at fault because the system of policing umpires in India stinks. Incompetent umpires, guilty of committing silky mistakes, get plum assignments.

The entire ladder to the top needs to be overhauled to quell an existing nexus of promoting umpires, who had been rated poor by match referees, to important matches.

Anant Padmanabhan, now a third umpire after playing first class cricket for over two decades, had his confidence blunted when he was posted to officiate Under-16 matches in the North-east.

What stops the BCCI from changing the system? Surely not the amount of cricket, as India plays more than all the other countries put together. Yet we have only one umpire in the ICC panel, even less than Pakistan, whose cricket structure is in the doldrums because of international teams refusing to tour the country due to suspect security arrangements.

Since so many are bringing this up, there is currently no use of technology to help the umpire with a no-ball. It has been widely discussed but not implemented.

Criticism of umpires must be replaced by a proper gradation system, which was in place when former leg-spinner Srinivas Venkataraghavan chaired the umpires committee.

Neither does the BCCI appoint senior umpires as on-field coaches for on-the-spot correction of decisions nor does the Board conduct umpires’ courses at the National Cricket Academy, under the tutelage of Australian Simon Taufel, who won five consecutive ICC Umpire of the Year awards between 2004 and 2008.

Since every boundary or six is accompanied by loud music in the IPL, many umpires find it difficult to concentrate in those circumstances. But since the IPL is all about entertainment, who cares about umpires’ concentration in the big-moneyed league?

Since the stakes are high in the IPL, everybody, including distinguished umpires like Ravi, is under immense scrutiny, whereas repeat offenders continue to be rewarded.

Indian umpires are already over worked because of our demanding domestic season.
During the long and tough domestic season, umpires officiate in 20-25 matches, often in 40-45 degrees heat and have to travel throughout the country.

Overseeing IPL matches in front of huge noisy crowds, loud music, intense heat and overbearing scrutiny that too after enduring the extreme demands of the domestic league can be too much for some umpires.

These are hardly ideal conditions to work under, no matter how much one is paid. If you are highly paid, can you work for 24 hours? No.

So let us stop criticising and start viewing the situation from an umpires’ point of view.