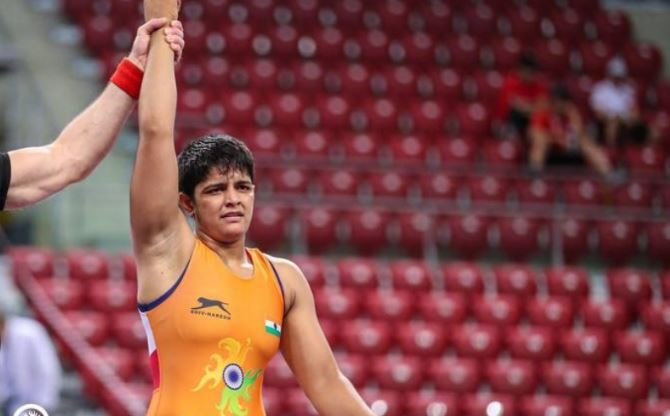 At the Makuhari Messe in Tokyo, Sonam lost to the Asian championship silver medallist on the basis of the ‘highest scoring point’ rule after the two grapplers were tied 2-2 on points at the end of the bout.

According to international wrestling rules, in case of a stalemate, the winner is decided on the basis of highest scoring move by the wrestler. Khurelkhuugiin executed a two-point takedown in the second period, while Sonam got one point in each of the two halves.

The 19-year-old Sonam’s hopes of getting back into the competition through the repechage route were dashed after Khurelkhuugiin lost to the former world champion and second seed Taybe Yusein of Bulgaria in the quaters.

The repechage rule allows grapplers who have lost early in the competition a second chance, should their victor make it to the final.

All the Indian wrestler, including Sushil Kumar, Yogeshwar Dutt and Sakshi Malik, who have gone on to win medals at the previous Olympics have made it through the repechage route.

Sonam, who had recovered from a knee injury before the Olympics, began cautiously as the two wrestlers tested each other in the initial exchanges.

With no clear openings, Sonam kept up the pressure on Khurelkhuugiin and shut any openings by staying close to the Mongolian.

The Indian was the first to register a point by pushing her opponent out of bounds and then doubled the lead at the start of the second round to force the Mongolian into action.

Khurelkhuugiin, silver medallist at the Asian championships earlier this year, however, kept her cool and was rewarded with seconds remaining on the clock.

A single-leg takedown, which earned her two points, was enough for Khurelkhuugiin to win the bout.

Sonam had sealed her place at the Olympics through the Asian Olympic qualifiers in April.

Competing in the 62kg category, Sonam has had a great run of form as she beat Rio 2016 bronze medallist Sakshi Malik four times in the domestic circuit.