New Delhi: When the young boy began playing club football in early 60s, he kept a notebook in his bag. In the night after every match, the boy would meticulously note down the details of the goals he scored.

After some time, he stopped the practice. Because, in his own words, he lost count. “In my 25 years of active football career, I must have scored at least 500 goals. Now, I don’t even remember most of them,” he said.

The “boy”, Inder Singh, on December 23, Monday, completed 76 years of his journey in life. No one celebrated the day except his family members. He received no birthday wish through ever-active social media.

It doesn’t matter, perhaps. Inder Singh’s place in history as one of country’s most skillful and prolific scorers can never be disputed. In Indian football, only Sahu Mewalal could match his fabled scoring abilities.

Interestingly, Inder’s extraordinary skills as a striker was spotted early by no other than Sir Stanley Rous, the then FIFA president in 1964 Asian Cup in Israel. On May 27, Inder played his first match for India in a major meet.

In the morning of the match the team was devastated by the news of Prime Minister Jawaharlal Nehru’s passing away in Delhi. There was even discussion about abandoning the tournament and return home. 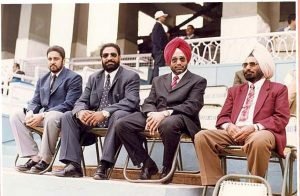 After much deliberations, Chuni Goswami led India took the field to beat South Korea 2-0. The second goal was a brilliant piece of work by young Inder.

“After the match, the FIFA president called me. He said ‘you are one of Asia’s finest forwards’. I was simply overwhelmed,” remembers Inder. India finished runners-up. Inder was adjudged best forward with two goals.

It was only the beginning. Having started playing in the seniors in 1960, Inder played till 1985. There was no modernised gym, no physical trainer, no dietician. Not even a proper coaching system.

Yet, Inder’s speed, stamina and his unbelievable ability to take a quick turn and slam an accurate blinder in a flash remains part of Indian football’s folklore. He suffered several serious injuries, but returned stronger.

“Even in his twilight years, to try and mark Inder was a nightmarish experience,” says former India stopper back Manoranjan Bhattacharya.

Inder’s father Bhagat Singh was a farmer, mother Tej Kaur a simple homemaker. None in his family ever played football. Inder was attracted to the beautiful game at school level under coach Jitender Singh Walia. He soon became one of country’s finest.

“Scoring goals was my specialty. First I played for Leaders Club for 12 years. Rest of my career was spent in JCT. I used to score most of the goals for my clubs. In 1974 Santosh Trophy, Punjab scored 46 goals. I scored 23, including three against Bengal in final,” says Inder.

Why there is dearth of strikers in India now? Inder pauses for a moment. “I am not sure. The current boys have impressive speed and stamina. May be too many foreign strikers are dominating Indian football these days.

“What we need is impact players. Like Peter Thangaraj, Jarnail Singh, Arun Ghosh, PK Banerjee, Chuni Goswami. In my opinion, they are unmatched till date.”

To score goals, Inder says, one also needs a perfect partner. “In Leaders Club, I had Sri Kishen with me. He came from Railways. He was 10 years older than me.

“I will use my stamina to create a move from deep. Then I will pass it for Sri Kishen. Next would be his through pass, which was like a knife going through butter. I will do the finishing job. Together we scored many, many goals. In Durand, DCM, Rovers Cup,” says Inder. 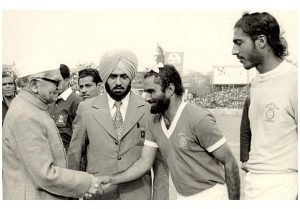 Inder Singh (centre) is generally regarded as one of Indian football’s best ever strikers.

There were too many ups and downs in Inder’s career. Starting 1963, Inder was a permanent member of Indian team. Yet, he had to miss 1970 Asian Games because of a ligament tear.

Before 1974 Asian Games, federation official privately told him he will be chosen captain. Another injury before the preparatory camp shattered his dreams.

“I have no regret whatsoever. In one Merdeka tournament, Malaysian Prime Minister Tunku Abdul Rahman asked me whether I would like to shift to Malaysia and play for his country. I declined.

“Recruiters from Mohun Bagan and East Bengal would line up in front of my home in Phagwara at the start of every season. I sent them back. Always. I loved to play football. I played it on my own terms,” says the legend.