On this day: India, under Dhoni, beat Pak to win inaugural World T20 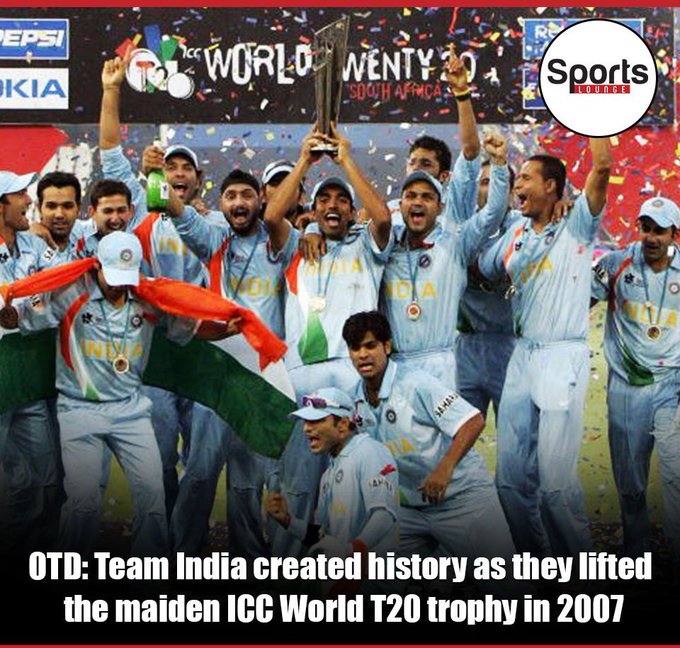 New Delhi: It was on this day in 2007 when Team India, led by MS Dhoni, won the inaugural edition of the T20 World Cup, defeating Pakistan in a pulsating summit clash which kept the fans, both in the stadium as well as those across television sets, on the edge of their seats till the very last moment.

With one wicket in hand, Pakistan needed six runs from the final four balls at the Wanderers in Johannesburg. Joginder Sharma, who was probably bowling the over of his life, was under immense pressure after giving away seven runs of the first two balls.

Misbah-ul-Haq was at the crease along with Mohammed Asif and all the players in the Pakistani dug-out were on their feet, waiting for Misbah to score the winning shot and celebrate what would have been one of their biggest wins at the international stage.

Amid all the nervousness, Joginder has a long chat with Dhoni who comes all the way down from the wicketkeeper’s end to soothe the medium-pacer.

He takes a deep breath, takes off from his run-up, and bowls a slower delivery outside the off stump. Misbah goes for the scoop shot over short fine-leg. The ball goes straight up in the air and S. Sreesanth takes the catch, a moment because of which his name got etched in the record books.

Thirteen years have passed but still the images of Dhoni lifting the World T20 trophy alongwith his teammates is as fresh as it can get in the memories of cricket fans across the country.

“I will remember this special day till my last breath. It changed the Indian cricket in terms of what followed the next http year. It was a complete team effort through out the tournament,” tweeted Irfan Pathan on Thursday while remembering that day.

India’s journey to the World T20 title was nothing short of a fairytale. A relatively young team, led by a long-haired Dhoni, made it’s way into the last-four riding on famous wins over the likes of South Africa and England who had more T20 experience and were counted among tournament favourites.

And after beating hot favourites Australia in the semifinals, the Men in Blue entered the summit clash with a belief they could achieve something special and leave behind the poor performance in the 50-over World Cup where they had to crash out of the tournament in the initial stages in the West Indies.

After opting to bat, Gautam Gambhir, who had been one of India’s top performers in the tournament, scored 75 runs as Dhoni’s side were limited to 157/5 in their stipulated quota of 20 overs in the finale. The other Indian batsmen fell cheaply and only Rohit Sharma managed to hit some good runs as he made 30 not out.

Yuvraj Singh, the hero from the epic semi-final match against Australia, found it tough to get going and was dismissed for just 14. Skipper MS Dhoni too departed cheaply for just 6. Rohit Sharma, in the end, played a cameo of 30 to take the team total to 157/5 in the allotted 20 overs.

During the chase, Pakistan suffered an early blow when Mohammad Hafeez was dismissed in the first over, and Kamran Akmal fell for a duck soon afterwards. The hopes were all but dashed for Shoaib Malik-led side when they lost their skipper and Shahid Afridi. However, Misbah played a blinder of an innings to take his team almost across the finishing line until he went for the scoop down the short fine leg and made Pakistan short of winning the title by just five runs.

Thirteen years have passed since that memorable day and Team India are still in search for their second World T20 title, something which Virat Kohli and boys would desperately want to achieve in the next two years when two flagship T20 tournaments take place.