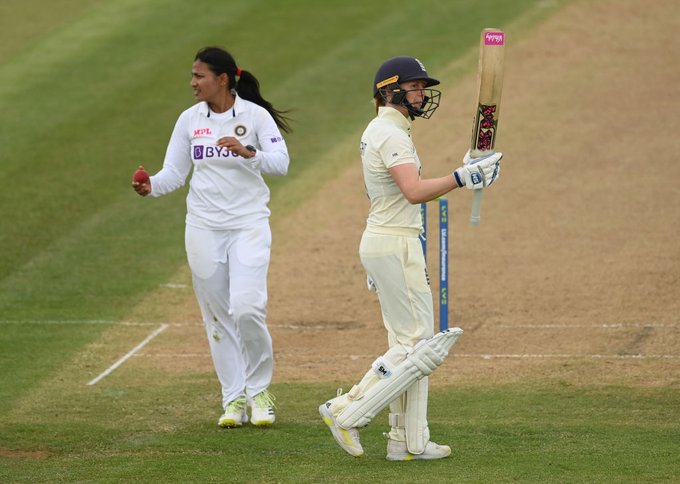 Bristol: Led by captain Heather Knight’s 95, England’s top order fared pretty well while Indian women would be satisfied at restricting the host to 269 for six wickets at stumps on the first day of the one-off Test here on Wednesday.

For India, debutant off-spinner Sneh Rana was the most successful bowler with three wickets, and she also bowled the most overs on the opening day, 29. Her victims included Tammy Beaumont (66, 144 balls, 6x4s), wicketkeeper Amy Ellen Jones (1), and Georgia Elwiss (5).

Debutant Deepti Sharma bagged two crucial wickets, of Heather when she was just five runs short of a century and Natalie Sciver (42, 75 balls, 6x4s). The Uttar Pradesh off-spinning all-rounder had both batswomen leg before the wicket.

Heather was involved in two important partnerships. She and Tammy added 71 runs for the second wicket, and then 90 for the third with Natalie. These two partnerships provided solidity to England’s first innings, even as India missed a few opportunities and lost a review.

England, on the other hand, lost three reviews, including the one taken for Heather.

Shafali Verma took a one-handed catch of Tammy at short leg off the bowling of Sneh broke the opening wicket partnership of 69.

Earlier, England women had won the toss and elected to bat.

For England, all-rounder Sophia Dunkley made her debut. She became the first black player to represent the England women’s Test team.