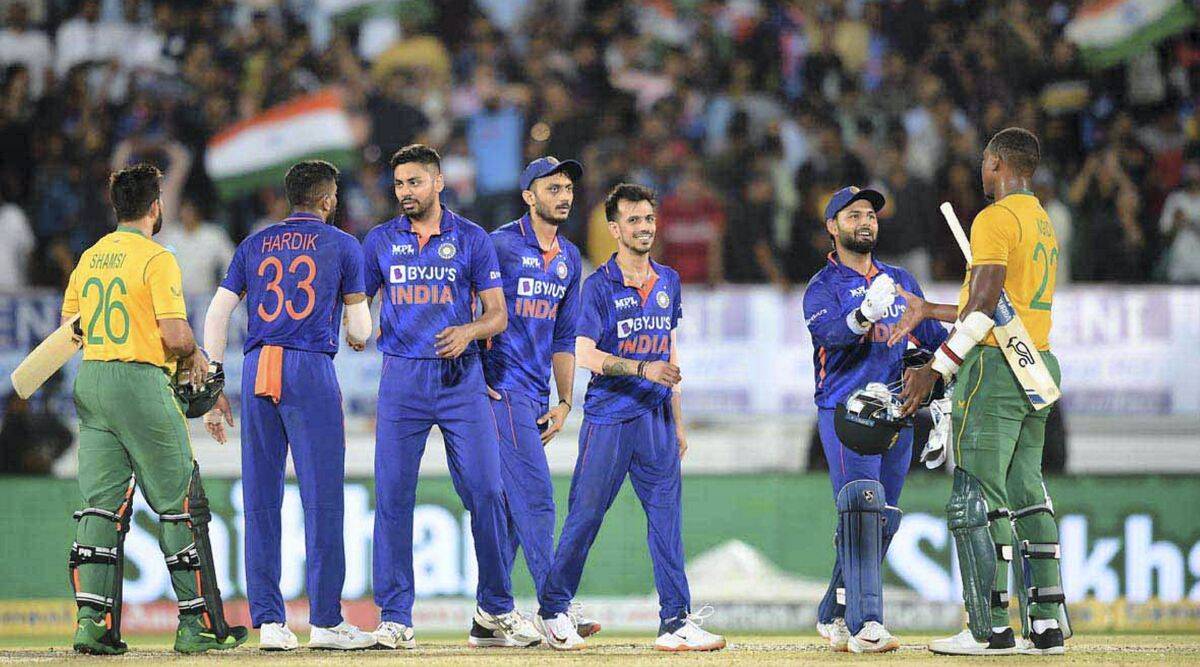 Bengaluru: A lot of grey areas are yet to be addressed but a young Indian team, with an admirable collective temperament, will start as favourites in the series-deciding fifth T20 International against South Africa here on Sunday.

In a space of eight days, this Indian team has played four games. It fielded an identical XI, which is in sync with Rahul Dravid’s “school of continuity”, seen the nadir in the first two games, only to break its own record of highest margin of victories over the Proteas — by 47 runs in the third game and by 82 runs in the fourth.

With Dinesh Karthik doing exactly what is expected of him and Harshal Patel and Avesh Khan also hitting the straps, the Indian fans would want to see Yuzvendra Chahal perform a trick or two at his IPL home ground in a match that matters the most.

Therefore, when the teams step out on the M Chinnaswamy Stadium turf, the side that looked jaded and overcooked in the first two games will start as overwhelming favourites as the South Africans have already lost the plot.

If Temba Bavuma is unable to recover, they will miss a leader more than the batter. And suddenly in the last two games, the batting has looked iffy on tracks that have variable bounce, which has made this Indian attack look way more lethal.

Call it strangely pleasant, but it remains a fact that in this series a lot of things haven’t exactly gone as per plan but yet India have managed to level the series after being 0-2 down.

A young captain who, perhaps, would have liked a few days in his hometown in Rourkee had there not been a pressure from one of the stakeholders to have at least a few stars in the absence of safe ‘box-office’ bets like Virat Kohli, Rohit Sharma or Jasprit Bumrah.

Neither has Pant’s captaincy been exceptional nor has his similar pattern of dismissals inspired confidence but India have somehow managed to pull through.

If they finally win the series the young man would be in that leadership mix alongside Hardik Pandya and KL Rahul when the next transition in Indian cricket happens after the 2023 ODI World Cup.

If coach Dravid wanted to check out whether there is a possibility to tinker with the existing top three, the troika of Ishan Kishan, Ruturaj Gaikwad and Shreyas Iyer haven’t exactly fitted into the jigsaw puzzle.

Gaikwad, with his current technique, would be nine out of 10 times found wanting against quality attack on better pitches, with sporadic performances here and there. In top flight cricket, he won’t get those couple of uncapped domestic bowlers whom he can bully. On the contrary, he could get bullied by express pace.

Ishan Kishan has a limited range of strokes and one shouldn’t go by the volume of runs scored in this series as the extra bounce and pace on Australian wickets will be a difficult proposition.

Shreyas Iyer got a full series but he should be the first one to admit that he has blown it with both hands and when India next play against Ireland at Malahide, his place will go to Suryakumar Yadav, considered a way better T20 proponent.

There is something about big ICC event years and Karthik revving up his performances.

He is already going to don the big gloves in Ireland and the manner in which he is proving to be an asset at the back-end, no one should be raising eye-brows if he becomes the designated keeper-batter by the time India play Pakistan at MCG the in the last week of October.

Among the bowlers, Bhuvneshwar Kumar is once again swinging the new ball and Avesh Khan, having developed a well-disguised bouncer along with an ability to bowl more fuller and hit the hard lengths, is also a contender among the five pacers that India might carry Down Under.

The spinners in this series, despite an improved effort, have been below-par. Axar Patel has blown hot and cold, but more important, looked uni-dimensional while Chahal, in his bid to be quicker through the air, has proved to be profligate.

The series hasn’t been one of India’s best but somehow, just like top teams do, the ‘Men In Blue’ have found their way out to win matches under pressure. That augurs well as Pant and his men aim to wrap up the series at the ‘Garden City’.

Pant falling into outside off-stump trap, not a good sign: Gavaskar