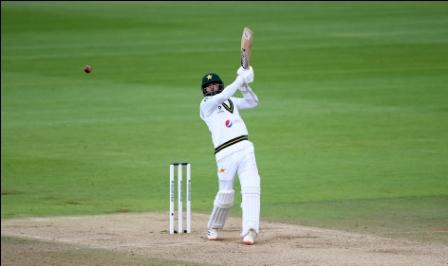 Southampton: Pakistan captain Azhar Ali registered his 17th Test century but despite his efforts, James Anderson took 5/56 as the visitors were bowled out for 273, leaving them following on 310 runs behind at the end of the day.

England began day three in an enviable position, after Zak Crawley’s 267 and Jos Buttler’s 152 led them to a massive first-innings total of 583/8, before James Anderson claimed three quick wickets at the start of Pakistan’s innings.

Asad Shafiq came out to resume the innings on the third morning after Babar Azam had fallen to the last ball of the previous evening, but the No. 5 didn’t last long, with Anderson securing his fourth wicket of the innings via an outside edge to slip.

Fawad Alam applied himself alongside his captain, and the pair made sure that England’s bowlers didn’t have things all their own way as they stayed together for 23.3 overs, split across the lunch break – which was taken half an hour earlier than scheduled due to rain.

But England maintained control over the run-rate, and only 45 runs had been added by the two when Dom Bess induced an edge from Fawad which was well held by Jos Buttler.

Mohammad Rizwan’s arrival preceded Pakistan’s most dominant spell of the match so far, as he and Azhar moved beyond survival and began to score with some freedom. The Pakistan skipper moved past 6,000 career runs in Tests shortly before reaching his fifty, and the pair continued on as England’s bowlers struggled to make an impact with the older ball.

Jofra Archer bowled a couple of fiery short-pitched spells, regularly clocking well over 140kph, but Rizwan and Azhar weathered the storm. The Pakistan wicket-keeper moved to fifty, becoming Pakistan’s first-ever gloveman to register two fifties in a Test series against England, and Azhar reached his ton soon after.

The breakthrough finally came when Chris Woakes managed to find a thin edge down the leg-side from Rizwan, which was smartly taken by Buttler diving to his left.

Stuart Broad got rid of both Yasir Shah and Shaheen Afridi with the new ball, both to sharp catches, and Mohammad Abbas was the ninth man to fall, amidst an action-packed ball.

Broad dropped a straightforward chance at mid-on off Anderson – the third chance for his five-for to be put down – but recovered quickly to run out the No. 10 with a direct hit.

Anderson finally claimed his fifth wicket as Naseem Shah edged to slip to leave Pakistan 273 all out, allowing England to enforce the follow-on.

Bad light prevented Pakistan’s second innings from starting, though not before Azhar Ali had come back out of the dressing room as he decided to promote himself up to open the batting after his unbeaten 141*.